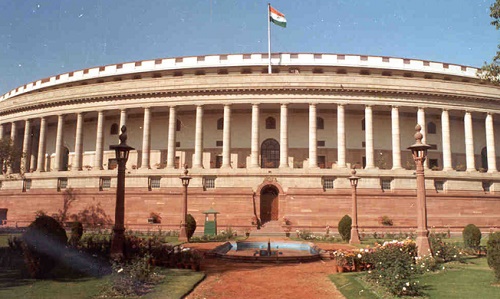 New Delhi: The Budget session of the Lok Sabha, which was to conclude on Friday, is to be extended by three more days and will now end on May 13 with Government set to push the contentious land acquisition bill.Â

With this, the end of the second part of the budget session of the Lower House will coincide with that of the Rajya Sabha whose sittings also comes to an end on May 13.Â

The decision was taken at a meeting of the Cabinet Committee on Parliamentary Affairs(CCP) chaired by Rajnath Singh.Â

Minister of State for Parliamentary Affairs Rajiv Pratap Rudy said after the meeting that a number of legislations are pending for passage and hence the CCP has decided to recommend extending the session in Lok Sabha for three more working days till May 13.Â

“The CCPA met today and decided that the session in Lok Sabha should be extended for three more days on Monday, Tuesday and Wednesday,” he said.Â

The bills that Rudy named for consideration during the extended period included the controversial land bill.Â

Government’s move to extend the session did not find favour at the meeting of the Business Advisory Committee(BAC) yesterday, where even allies like Shiv Sena opposed it.Â

When the proposal was floated by Rudy at the BAC meeting, headed by Speaker Sumitra Mahajan, several political parties also opposed it.Â

Parliamentary Affairs Minister M Venkaiah Naidu, at the BJP Parliamentary Party meeting yesterday, had already sounded the party MPs that they should be prepared for an extension of the Lok Sabha beyond Friday, if required.Â

Government wants to bring a host of bills, which are to be taken up in Lok Sabha, including the Negotiable Instruments (Amendment) Bill and National Waterways Bill among others.Â

The current session of Lok Sabha otherwise would have ended on May 8, and that of Rajya Sabha on May 13. The session of the Upper House had started three days later on April 23 while the second part of budget session in Lok Sabha had begun on April 20.