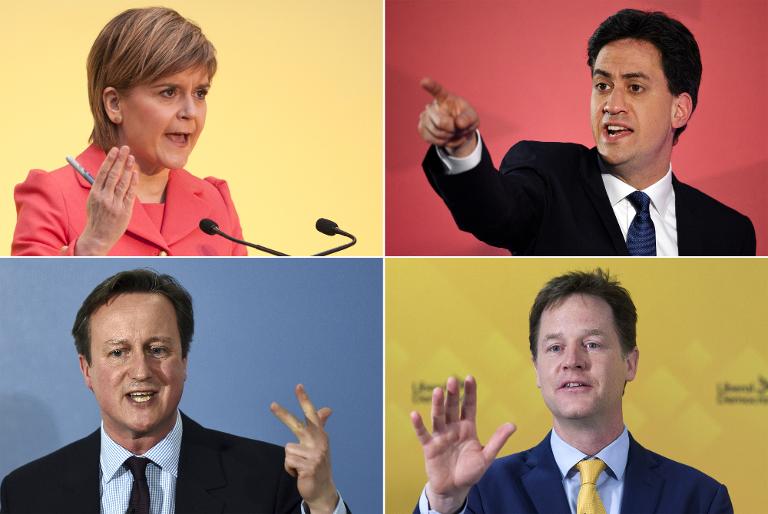 Britain’s political leaders ended their campaigns ahead of Thursday’s general election, the most unpredictable in living memory, which could yield no clear winner and weeks of haggling over the next government.

A win for Prime Minister David Cameron’s Conservatives would raise the risk of Britain exiting the European Union because he has promised a referendum on leaving the bloc by 2017.

But some business leaders and investors have warned that the main opposition Labour party, led by Ed Miliband, could be bad for the economy, which is weighed down by a budget deficit of nearly Â£90 billion (120 billion euros, $140 billion).

Final polling data released on the eve of the vote showed a rush of last-minute campaigning had failed to sway voters one way or another.

With neither expected to win outright and smaller parties on the rise, the election is also likely to underline the decline of traditional two-party politics in Britain and the rise of a more multi-lateral European style.

“This has been a remarkable election,” Professor Tony Travers of the London School of Economics said, predicting that it would lead to some form of multi-party government “probably less stable than the one that formed in 2010.”

The Conservatives have been in power in a coalition government with the centrist Liberal Democrats since the 2010 election.

But it is thought that a minority government supported on an informal basis by a smaller party or parties is more likely than a formal coalition, under which the Liberal Democrats have seen their support plummet in the last five years.

Cameron concluded a tour of the country with a rally at a livestock market in Carlisle in northwest England, where he told voters “this is the election that will define this generation.”

“It comes down to a choice of leadership,” Cameron told the crowd in the crucial marginal seat. “Do you want the people who are fixing the economy, or the people who wrecked our economy?”

In a visit to Colne in northwest England, Miliband urged voters not to listen to “siren voices” as they entered the ballot box and insisted the Conservatives would only “protect the privileged few” if re-elected.

“There are some people who tell you Britain can’t be better than this. I say they are wrong,” Miliband said.

Both leaders insist they are still fighting for a clear majority in the 650-seat House of Commons which would let them govern alone but attention is increasingly turning to the alliances they could make with smaller parties.

But Cameron seemed to acknowledge the possibility of a fresh coalition or minority government in an interview with BBC radio in which he vowed to “put the country first and do what I can do to provide a strong and stable government.”

His Conservatives look well placed to team up again with Clegg’s Liberal Democrats, assuming the Liberal Democrat leader can hold on to his own seat in Sheffield, northern England.

While Miliband has ruled out a formal deal with the pro-independence Scottish National Party (SNP), it is thought they could still prop up a minority Labour government vote-by-vote.

The Liberal Democrats have left open the possibility of backing either the Conservatives or Labour while the SNP will block the Conservatives, and the anti-EU UK Independence Party is unlikely to win more than a handful of seats.

Only one thing is certain — the SNP is likely to make major gains in Scotland at Labour’s expense, transforming Britain’s political scene and potentially bringing the prospect of Scottish independence closer.

Negotiations to form a government are likely to be complicated. The first big test for the new government will come when parliament votes on its legislative programme following the Queen’s Speech on May 27 in a de facto confidence motion.

Polls open at 0600 GMT and close at 2100 GMT on Thursday. Exit polls are published immediately after that followed by the first results shortly afterwards and final results Friday afternoon.

The BBC poll of polls average puts the Conservatives at 34 percent, followed by Labour at 33 percent, UKIP at 13 percent and the Liberal Democrats at just eight percent.

But the percentage breakdown is a poor indicator of the final election outcome in Britain because of the first-past-the-post system, which counts the results only in individual constituencies, not the overall vote share.