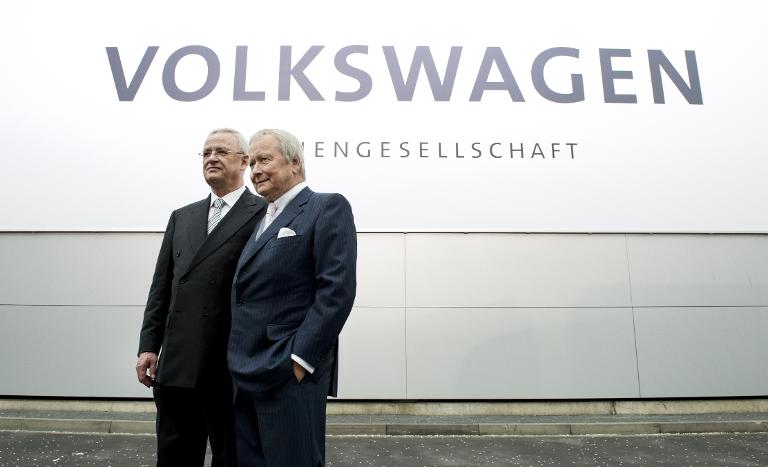 “The past couple of weeks have been eventful ones, to put it mildly,” Winterkorn told shareholders at VW’s annual meeting in the northern city of Hanover.

“This is why it is good that we have now returned to calmer waters. That we have clarity about our future direction. And, above all, that we can concentrate fully on our business,” he said.

Last month, Winterkorn locked horns with VW’s supervisory board chief and patriarch Ferdinand Piech in a bitter battle that spooked investors and appeared to place a question mark over the successful running of the group.

Seventy-eight-year-old Piech, a member of the powerful Porsche dynasty that is a shareholder in Volkswagen, and one of the most important figures in German business, had sent shockwaves through the industry by declaring that he was “distancing himself” from Winterkorn.

But the steering committee of VW’s supervisory board threw its weight behind Winterkorn, 67, saying it intended to extend his contract.

While Piech vehemently denied trying to oust his former protege, he eventually threw in the towel, resigning on April 25.

Winterkorn told shareholders it was “important for me to thank Piech — not only on behalf of all 600,000 employees, but also personally.”

Over the past five decades, Piech had “shaped the automotive industry like no other -â€“ as an entrepreneur, as an engineer, as a courageous visionary. The group and its people have much to thank Piech for. This is something that will not change. And we and I have tremendous respect for this lifetime achievement,” the CEO said.

Piech was not present at the meeting.

Winterkorn complained that VW had “seen any number of interpretations, speculations and â€“- unfortunately â€“- even exaggerations over the past few weeks. It’s important that you, as our shareholders, know that Volkswagen is a fundamentally sound, well positioned company.”

Looking ahead to the current year, VW expected a “moderate” increase in customer deliveries, an increase of up to 4.0 percent in sales revenues and an operating return on sales of between 5.5 percent and 6.5 percent, Winterkorn said.

One of the issues which appeared to have caused the rift between Piech and Winterkorn — who had been seen as the former’s close ally and heir apparent — was the car maker’s difficulties in making substantial inroads into the US market and its over-dependence on the Chinese market.

Winterkorn promised shareholders that the “Volkswagen brand is going on the offensive again in the United States. I’m committed to that.”

It was true, he conceded, that “after some major successes, the Volkswagen brand has lost momentum (in the US). The reasons for this have been clearly identified. We have drawn up a dedicated master plan for the US, which we are now implementing step by step,” Winterkorn said.