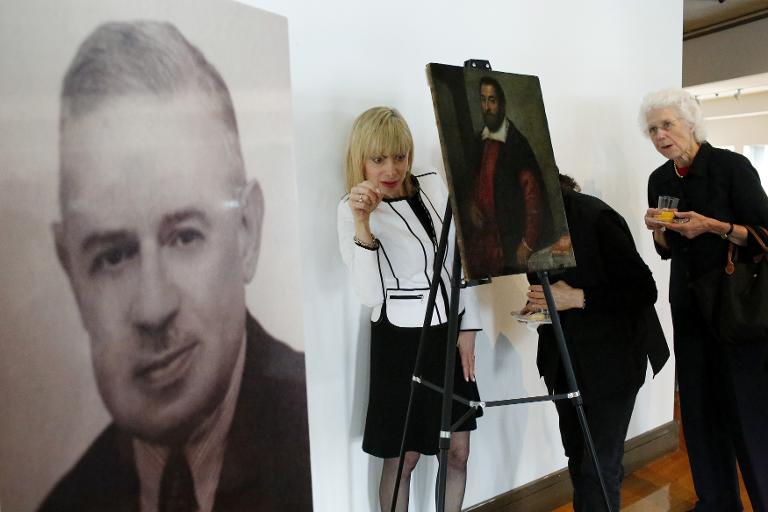 Two more paintings acquired by a librarian while serving for the US army in Germany in late 1945 were also handed over during a ceremony at the State Department in Washington after the families had contacted a US foundation that tracks down missing artwork.

“These paintings are just the tip of the iceberg of the hundreds of thousands of paintings and other cultural items still missing since World War II,” said Robert Edsel, the founder and chairman of the Monuments Men Foundation.

The foundation is named after a US task force of museum directors, curators and educators who protected cultural treasures from the destruction of World War II, an achievement memorialized in the 2014 George Clooney movie “The Monuments Men.”

Major William Oftebro of the 750th tank battalion obtained the three paintings while he was responsible for guarding a potassium mine near the city of Dessau in what is today the German state of Saxony-Anhalt.

Local museum officials had stored their collection underground to save it from Allied bombing raids that were flattening cities in Nazi Germany.

According to the Monuments Men Foundation, Oftebro mailed the artworks by 17th-century Flemish painter Frans Francken III, 18th-century German artist Christian Wilhelm Ernst Dietrich and his Austrian contemporary Franz de Paula Ferg back home, telling his family that he had won them in a poker game.

Years after Oftebro’s death, his stepson James Hetherington contacted the Dallas-based Monuments Men Foundation last August after he had learned about their mission through the George Clooney movie, which is based on one of Edsel’s books.

Edsel used the Hollywood fame to establish what he calls “America’s most wanted for culture,” a toll free tip line for missing artworks from World War II which in many cases crossed the Atlantic illegally.

“This has proved very successful,” he said, adding that his team is still scouring through hundreds of leads.

The second discovery presented on Tuesday, which involves a painting of Britain’s Queen Victoria and her eldest daughter, and a painting of Charles I of England, was also made possible by the hotline.

According to the Monuments Men Foundation, both paintings had been at Castle Friedrichshof just north of Frankfurt, which in April 1945 was confiscated by American forces and converted into an officer’s club.

They ended up in the hands of Margaret Reeb, a librarian for the United States Special Services.

“We don’t know who she acquired them from or what she paid for them. But she ended up with them and brought them back to America, and they have been in a safety deposit box ever since,” Reeb’s nephew Randy Holland, who attended the State Department’s ceremony, told AFP.

“When we discovered them after she passed away 10 years ago, we kept them in the safety deposit box because we didn’t know what to do with them either.”

Holland’s younger brother Mike heard about the Monuments Men Foundation on the radio, and the family decided to return the paintings to the owner, a German count who now runs a five-star hotel on the lavish estate of his forefathers.

“We just thought it was the right thing to do,” said Randy Holland, a 70-year-old former tax collector from Montana.

“Thou shalt not steal. When we found out that these things were stolen, you wouldn’t feel right keeping them. No matter how valuable they are.”

Assistant Secretary of State Victoria Nuland said that thanks to family and foundation efforts, “the US is now helping to right the errors of the past.”

“And it’s particularly poignant to do so this week as we also mark the 70th anniversary of the end of the war in Europe.”

German Ambassador Peter Wittig told the families that “you can be assured that these works of art are coming home to a worthy setting,” hailing the “excellent cooperation in the restitution and the return of art” with the United States.

Wittig also deplored the “unprecedented campaign of looting and plundering of valuable cultural treasures by the Nazi regime,” which accounts for most of the stolen art during World War II.

At a ceremony in New York on Tuesday, a 17th century painting stolen by the Nazis from a Jewish German art curator in Paris who was later murdered at Auschwitz was returned to the late owner’s daughter.