US investigates IS link to Texas shooting | Newsmobile
Friday, August 12, 2022

Home World US investigates IS link to Texas shooting 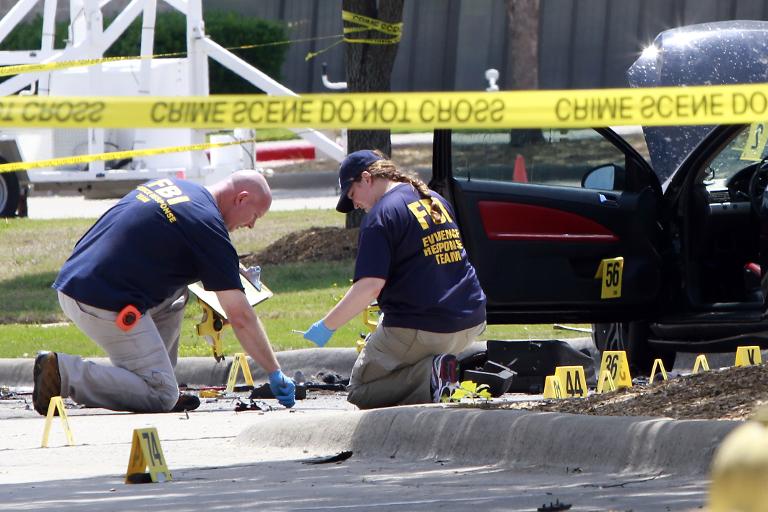 US investigators look into the background of two slain gunmen after the Islamic State group claimed it had ordered an attack targeting an exhibit of caricatures of the Prophet Mohammed.

The White House said it was too soon to tell if the jihadist group was behind the failed attack, in which two gunmen were shot dead by a police officer before they could storm the event.

The case “is still under investigation by the FBI and other members of the intelligence community” to determine if the two assailants had any ties to the IS group, White House spokesman Josh Earnest told reporters.

“So it’s too early to say at this point.”

The Islamic State claim marked the first time the extremist group, which has captured swaths of territory in Syria and Iraq using brutal methods, alleged to have carried out an attack in the United States.

“Two of the soldiers of the caliphate executed an attack on an art exhibit in Garland, Texas, and this exhibit was portraying negative pictures of the Prophet Mohammed,” the jihadist group said.

But Earnest said IS jihadists and other extremists are often “trying to capitalize on the opportunity that’s presented by social media to try to communicate with individuals around the world, including inside the United States.”

US Senator John McCain, who is often critical of White House security policy and has warned of the jihadist threat, also cautioned that the claim should not be taken at face value.

“There’s no doubt that these young people were most likely inspired by ISIS,” he told reporters, adding: “… there’s a difference between carrying out an ISIS order and being inspired by ISIS.”

Police said the two gunmen drove up to the conference center Sunday in Garland, where the American Freedom Defense Initiative was organizing a controversial Mohammed cartoon contest, and opened fire with assault rifles, hitting a security guard in the ankle.

A Garland police officer then shot and killed both men with his service pistol.

The two suspected jihadists were Elton Simpson, 31, and Nadir Soofi, 34, who shared an apartment in Phoenix, Arizona.

A Twitter account suspected of being linked to the gunmen vowed allegiance to the head of the IS group, Abu Bakr al-Baghdadi, The New York Times reported.

But the IS released no “martyr” video and authorities had yet to find evidence of a direct connection to the jihadists.

A day after FBI agents searched the apartment where the two men had lived, a portrait of Simpson began to take shape, as acquaintances recalled his passion for basketball and his youthful conversion to Islam.

But there were scant details available about Soofi, except that he had owned a struggling pizza and hot wings restaurant. Managing his business reportedly meant he sometimes had to skip prayers at the mosque.

Soofi reportedly graduated from the International School of Islamabad, in Pakistan, in 1998, and attended the University of Utah. A cousin told local media Soofi was born in the United States.

Simpson was convicted in 2011 of lying to the FBI about his plans to travel to Somalia. Federal prosecutors accused him of wanting to wage “violent jihad” there but a judge found the government had failed to prove that charge. Simpson was sentenced to three years’ probation.

But the FBI reportedly started investigating Simpson again in recent months after he began posting about the IS group on social media.

Simpson’s online activity was monitored and he was placed under occasional surveillance, though authorities saw no sign that he planned to stage an attack, according to media reports.

Kristina Sitton, a Phoenix attorney who represented Simpson in his court case, said she could not imagine why Simpson had turned to violence.

“I can only think that he must have snapped at the event that was taking place there,” she said.

Many Muslims find drawings of the prophet to be disrespectful or outright blasphemous, and such cartoons have been cited by Islamists as motivation in previous attacks.

Commentators have drawn parallels to the January mass shooting at the French satirical weekly Charlie Hebdo in Paris that killed 12 people and wounded 11 more.

In the Pakistani city of Peshawar, a crowd of about 70 people offered prayers for Soofi and praised him for his actions.

“I don’t know Nadir Soofi, I have never met him in my life but I praise him, he is a martyr and a real hero of Islam who gave his life while defending the honor of the holy prophet in the land of infidels,” Pir Muhammad Chishti, the cleric who organized the gathering, told AFP.