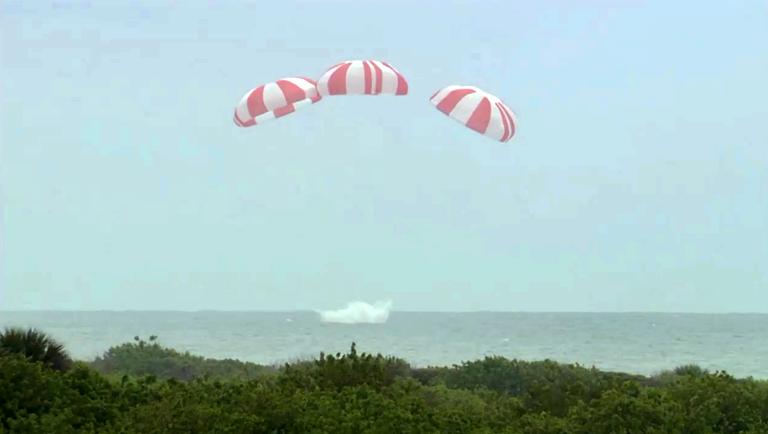 SpaceX’s Dragon capsule sailed through the first flight test of its emergency astronaut escape feature Wednesday, a critical step toward launching people into space from US soil in the next two years.

Not only did the abort test go according to plan, it also gave the California-based company a chance to showcase a spacecraft that it says could one day carry cargo to deep space destinations like Mars and beyond.

The US space agency described the test as “an important step in NASA’s endeavor to rebuild America’s ability to launch crews to the International Space Station from US soil.”

The demonstration also “proved the spacecraft’s ability to carry astronauts to safety in the unlikely event of a life-threatening situation on the launch pad,” NASA said.

An eject feature has not been featured on any American-built spacecraft in decades, not since the Apollo missions to the Moon in the 1960s and 1970s.

The Dragon’s goes further than those designed in the past, and can be used in case of emergency all the way to orbit, not just in the seconds after liftoff.

“I think this bodes quite well for the future of the program. I don’t want to jinx it,” SpaceX CEO Elon Musk told reporters on a conference call afterward.

With a crash test dummy strapped inside, the Dragon spaceship launched on a cloudy morning from Cape Canaveral.

Mid-flight, at about 5,000 feet (1,500 meters), the spacecraft jettisoned its trunk and three parachutes deployed to slow the descent of the Dragon capsule before it splashed down in the Atlantic Ocean.

The test was over in less than two minutes.

“Had there been people on board, they would have been in great shape,” Musk said.

Abort capability has been a feature of other space capsules built by Russia, as well as on the US Mercury and Apollo missions, but those systems would only work shortly after launch.

The US-made space shuttles were not designed to have an escape option for astronauts in flight. Seven people on board were killed when the Challenger shuttle exploded after launch in 1986 and another seven died when the shuttle Columbia disintegrated on re-entry in 2003.

The space shuttle program was retired in 2011 after three decades. Since then, the world’s space travelers have had to rely on Russia’s Soyuz capsules at a price of $71 million per seat.

The next main tests for the Dragon in the next year or so are a high-altitude abort test followed by an unmanned flight to the International Space Station, Musk said.

The first astronauts are scheduled to ride Dragon to space sometime in 2017.

Already, a cargo-only version of the space capsule makes regular supply journeys to and from the International Space Station.

Boeing is also making a crew vehicle, known as the CST-100, and its first piloted flight is scheduled for late 2017.

Musk, the cofounder of PayPal who also runs Tesla Motors, said crew flight is a priority for now, but missions to deep space lie ahead.

“Dragon is really designed not just for carrying crew to and from the space station but also more generally it is capable of transporting scientific payloads to anywhere in the solar system that has a liquid or solid surface, with or without an atmosphere,” Musk said.

Once it launches atop the Falcon Heavy, “it could pretty much go anywhere in the solar system because that is a heck of a big rocket,” he added.

Dragon could carry as much as two to four tons of supplies to Mars, where NASA hopes to be sending human explorers by the 2030s.

“So we are kind of excited about exploring that possibility,” Musk said.