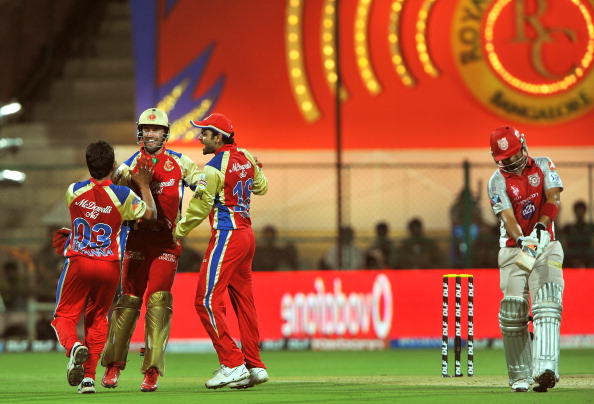 Bengaluru: Royal Challengers Bangalore would seek to consolidate their position in the top four, while the bottom-placed Kings XI Punjab would try to end a four-match losing streak when the two sides lock horns in an Indian Premier League cricket match in BengaluruÂ on Wednesday.

Placed fourth in the points table, RCB is coming off a 24-run defeat at the hands of Chennai Super KingsÂ on Monday.

The hosts, led by Virat Kohli, would be the favourites to emerge victorious against Kings XI Punjab, whose chances of making the playoffs are all but over after seven losses from nine matches.

RCB have four wins and as many losses in nine matches they have played so far, while KXIP remained at the bottom with four points against their name.Â

RCB would like to forget their defeat against CSK and return to winning ways at the crucial business end of the season. In fact, a loss here and there could spell doom for the hosts.Â

RCB could not get past the paltry CSK total of 148 for nine as they were all out for 124 following a horrendous batting display during which they lost seven wickets for 27 runs in 5.5 overs.

RCB have struggled to come good before their home crowd and lost three matches before pulling off a 10-over-a-side match against Kolkata Knight Riders.

With the likes of the big-hitting Chris Gayle, who missed out against CSK, A B de Villiers and Kohli himself in the team, the hosts can fancy their chances at Chinnaswamy stadium.