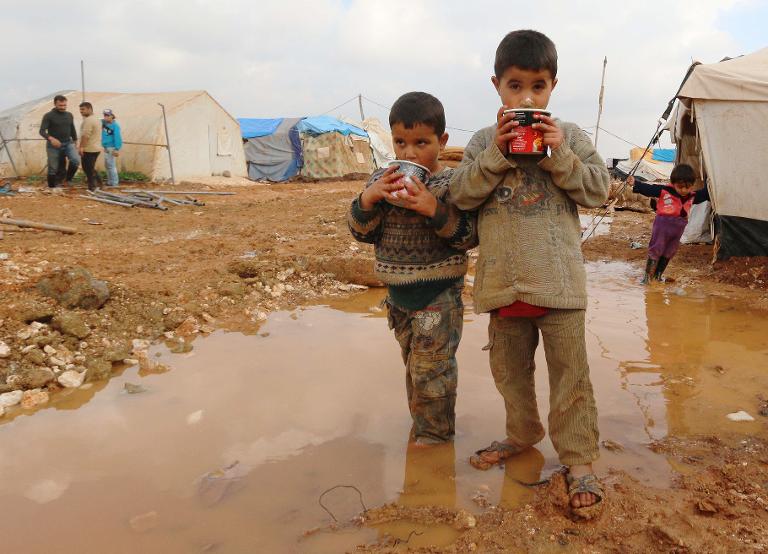 Conflicts and violence in places like Syria and Ukraine have displaced a record 38 million people inside their own countries, equivalent to the total populations of New York, London and Beijing, a watchdog group said Wednesday.

Nearly one third of them — a full 11 million people — were displaced last year alone, with an average of 30,000 people fleeing their homes every day, the Geneva-based Internal Displacement Monitoring Centre (IDMC) said in a report.

“These are the worst figures for forced displacement in a generation, signalling our complete failure to protect innocent civilians,” said Jan Egeland, head of the Norwegian Refugee Council which is behind the IDMC.

Internally displaced people (IDPs) is a label given to people who remain in their homeland, as opposed to refugees, who flee across borders.

According to the latest available UN statistics, there were some 16.7 million refugees in the world at the end of 2013, meaning the total number of displaced people is well above 50 million.

The number of internally displaced people is thus today around twice that of refugees — a dramatic shift from a few decades ago when the two categories stood on equal footing, Egeland said.

“One of the main reasons why the number of IDPs is growing so much are all the closed borders,” he told AFP, adding that the international community was “not willing or able to do as we promise: to protect the vulnerable and the innocent.”

The trend is clear: 2014 marked the third year in a row with record numbers of IDPs, with last year’s figures dwarfing those seen at the peak of the Darfur crisis in 2004, the spiralling violence in Iraq in the mid-2000s, or during the Arab Spring uprisings in 2011, IDMC said.

“This report should be a tremendous wake-up call,” Egeland said.

IDMC tracked internal displacement in 60 countries last year, but most of the people fleeing in 2014 were in just five countries: Iraq, South Sudan, Syria, Democratic Republic of Congo and Nigeria.

Iraq was the hardest hit, with 2.2 million people forced to flee inside the country from areas seized by the brutal Islamic State group.

Around one million more people were internally displaced in Syria last year, bringing the total number of IDPs there to 7.6 million, or 40 percent of the population.

In addition, some four million Syrians have become refugees.

For the first time in a decade, Europe was also the scene of massive displacement, with 646,500 people internally displaced in Ukraine in 2014 because of fighting between pro-Russian separatists and Kiev forces.

Egeland said that number had nearly doubled since the start of 2015, bringing the total number of IDPs in Ukraine to more than 1.2 million.

Boko Haram’s ruthless campaign to create an independent Islamic state in north-eastern Nigeria was also responsible for most of the nearly one million people internally displaced in the country last year, and had forced tens of thousands more to flee in neighbouring countries, the report said.

Egeland warned that Boko Haram and the Islamic State group’s reach across borders indicated “a very dangerous trend now, (with) more and more of these national problems becoming regional problems.”

The UN refugee agency meanwhile said that many of those displaced end up becoming refugees.

“The longer a conflict lasts, the more insecure (displaced people) feel and when hopelessness sets in, many will cross borders and become refugees,” said Volker Turk, UNHCR’s assistance head of protection.

This despair has helped create the deluge of people risking their lives to cross the Mediterranean, where more than 1,750 people have perished so far this year alone.

But war and political conflict are not the only reasons prompting people to flee their homes. More than half a million people displaced in Central America last year were running from criminals, Egeland said.

“It is criminal violence (and) drug cartels that are driving people out by the hundreds of thousands,” he said.