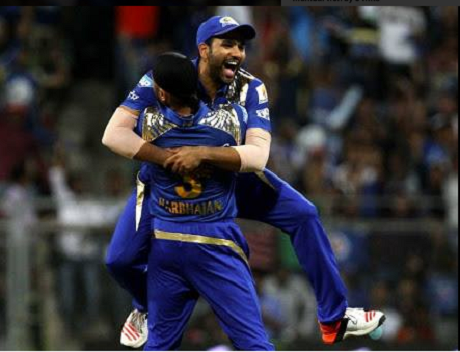 Mumbai: Captain Rohit Sharma and Ambati Rayudu made crucial knocks as Mumbai Indians notched up a thrilling five-wicket win over Delhi Daredevils in their rain-affected IPL cricket match to jump to the top half of the league table in Mumbai on Tuesday.

Mumbai struggled early in their chase of 153 as they were reduced to 8 for 2 in second over but captain Rohit Sharma (46) and Ambati Rayudu (49 not out) shared 60 runs for the fifth wicket to repair the innings before Kieron Pollard took them home with three balls to spare with a quick-fire 14-ball 26 not out.Â

It was a hard-earned victory for Mumbai as they had to build their innings brick-by-brick after early loss of wickets besides facing rain interruption. Credit must also be given to the bowlers, especially off-spinner Harbhajan Singh who returned with brilliant figures of 2/11 from his four overs to help Mumbai restrict Delhi to 152 for 6.Â

Play was interrupted after four overs due to lightening when Mumbai were 25 for 2 with Lendl Simmons (0) and Hardik Pandya (5) having already returned to the pavillion.Â

Play resumed after a short while, but rain halted it again after 5.2 overs when Mumbai were 40 for 3 and the home side must be feeling nervous at the possibility of losing the match if it could not be resumed.Â

But play did resume after half an hour and Rohit played the role of sheet anchor after coming out at 8/2 in the second over till he was out in the 16th over. His 37-ball knock had two fours and three sixes.Â

Rayudu played a solid innings of 49 not out from 40 balls which was laced with four boundaries and a six. Pollard then brought the home supporters at the Wankhede Stadium with a cameo of 26 not out from 14 balls which had three sixes in it as Mumbai scored 153 for five from 19.3 overs.