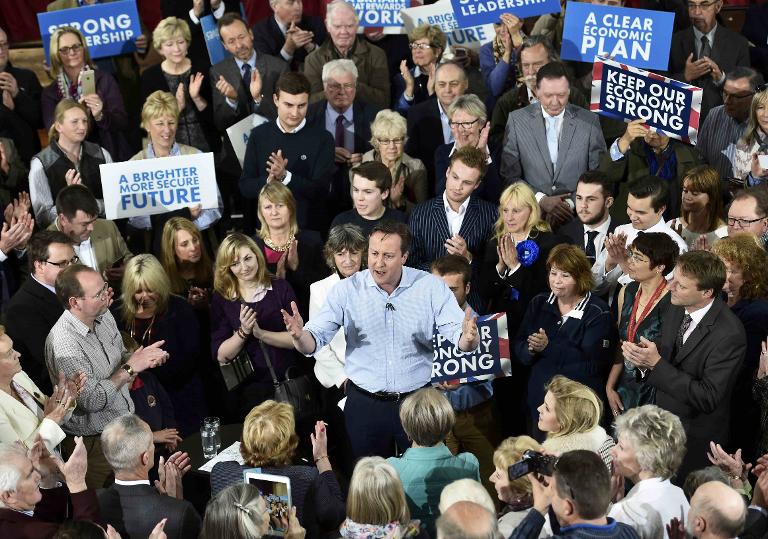 Britain’s political leaders were in a final push for votes ahead of Thursday’s knife-edge general election, while gearing up for the likelihood of drawn-out negotiations once polls close.

Prime Minister David Cameron, whose Conservatives are deadlocked with the opposition Labour party in opinion polls, launched a tour that will see him campaign until the last minute.

Neither of the two main parties is expected to win a clear majority in the House of Commons, setting the stage for days or weeks of negotiations to team up with smaller parties to take power.

Cameron urged voters to give his party a clear mandate to govern, saying the alternative was years of “backroom deals” if Labour sought to form a government with the support of the pro-independence Scottish National Party (SNP).

“There is still time to determine the outcome of this election,” Cameron said.

Labour leader Ed Miliband has ruled out a formal deal with the SNP but it is thought he could be prepared to work with them on a vote-by-vote basis to take power in a minority government.

The election dominated the front pages of Wednesday’s newspapers, with the Financial Times reporting a “scramble to line up durable coalition deals”.

The pro-UK Independence Party newspaper the Daily Express put a message from leader Nigel Farage on its front page urging readers to “vote for UKIP wherever you are” to cut immigration and help Britain leave the European Union.

In an editorial backing Cameron, The Times wrote: “The coalition took tough decisions to rekindle prosperity in Britain. The choice tomorrow is between building on that achievement or letting it unravel.”

But the Guardian warned of a “hitlist of welfare cuts”, reporting that civil servants had considered barring under-25s from housing benefits and abolishing maternity pay as options to keep costs down in the next administration.

While neither of the two main party leaders is talking in public about the possibility of a minority government, the polls suggest that Britain is heading that way for the first time since 1997.

The BBC’s poll of polls puts the Conservatives and Labour at 34 percent and 33 percent respectively, figures that have barely shifted since the start of the election.

It is thought that neither of the main parties will win a clear majority in the 650-seat House of Commons — in practice 323, since Irish nationalists Sinn Fein and the speaker do not take up their seats.

Therefore the role of smaller parties such as the Liberal Democrats and the SNP is likely to be crucial.

Liberal Democrat leader Nick Clegg, whose centrist party has been the junior partner in Cameron’s Conservative-led coalition for the past five years, openly raised the prospect of a second election this year on the campaign trail.

He said that only his party, which is keeping open the possibility of backing either of the two main parties, could help create a stable government by working with the Conservatives or Labour.

“Everybody knows that no one will win this election, even if David Cameron and Ed Miliband won’t admit it publicly,” Clegg said.

“The last thing Britain needs is a second election before Christmas. But that is exactly what will happen if Ed Miliband and David Cameron put their own political interest ahead of the national interest.”

But the Liberal Democrats could lose half their 57 members of parliament, and Clegg himself is fighting to keep his seat.

Meanwhile, the SNP could win more than 50 of the 59 seats in Scotland, despite losing last year’s independence referendum.

Sturgeon has vowed to block the Conservatives and wants to work with Labour while extracting concessions such as stopping austerity cuts and scrapping Britain’s Trident nuclear deterrent submarines, based in Scottish waters.

“The fact of the matter is, if there’s an anti-Tory (Conservative) majority on Friday morning, I want to see that anti-Tory majority come together to get the Tories out, but then make sure that it’s replaced with something better,” Sturgeon said.