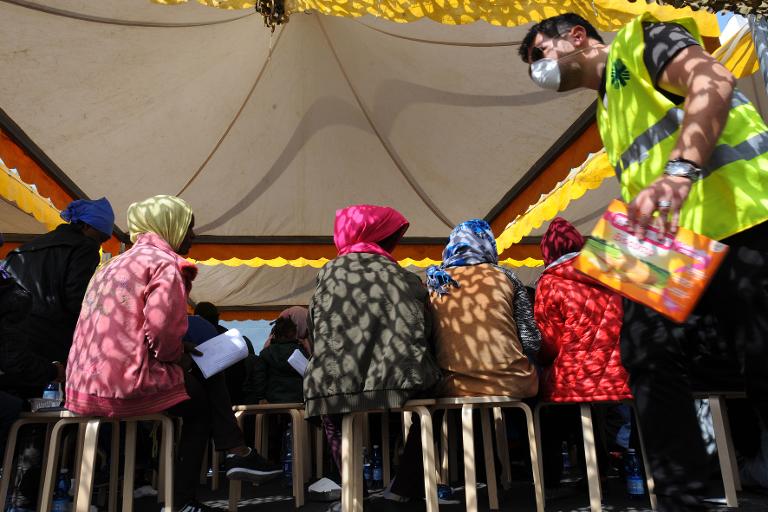 Italy on Tuesday renewed its appeal to the EU for help in managing a relentless wave of migrant arrivals, after around 40 migrants died when their inflatable boat sank off the coast.

Survivors of the tragedy reported 137 people were on the vessel when it either deflated or exploded shortly before a spate of rescue operations this weekend that saw the Italian navy and coastguard save almost 6,000 people on the sea.

“Some (of the survivors from the inflatable boat) said ‘very many’ died, others said ‘around 40′”, Giovanna di Benedetto of Save the Children told AFP on Tuesday.

Dramatic footage that was widely shared Tuesday on social networks showed dozens of mostly African migrants struggling to stay afloat after jumping off their sinking dinghy, desperately clinging to lifebuoys thrown from the deck of a cargo ship that came to their rescue.

It was unclear whether the images, which were also broadcast on television, were from the latest sinking.

Italian leaders anticipate a record number of arrivals on their southern shores between now and September, with last year’s total of 170,000 already an unprecedented number.

“It’s not enough to add 10 or so boats to those (operated) by the Italians,” said Italian Foreign Minister Paolo Gentiloni.

He also demanded the European Union help in the fight against human trafficking and make reforms to the process of granting asylum to migrants.

More than 1,750 migrants have perished in the waters between Libya and Italy since the start of this year.

The International Organization for Migration reported last month that the toll represented a 30-fold increase over 2014.

Gentiloni said Monday that promises made at April’s EU summit after a migrant boat disaster left 750 dead had to be honoured.

“A European emergency cannot continue to have only Italian responses,” he added.

This weekend’s surge in the number of boats leaving Libya was put down to the fine weather and calm sea conditions.

The survivors, whose harrowing experience was reported Tuesday, were part of a group of close to 200 migrants who were on two separate boats and were rescued in recent days in waters off Sicily.

The survivors arrived on Tuesday in Catania on the east coast of Sicily, on the cargo ship “Zeran”, which also carried five bodies.

More than 4,000 of those rescued this weekend have landed in southern Italian ports, and 485 more reached Sicily in the afternoon.

Among the arrivals was a baby girl born on board the Italian navy patrol ship Bettica.

Her mother had gone into labour just before leaving Libya aboard one of four rickety boats whose occupants were rescued.

Despite Italy shouldering so much of the rescue effort, and amid calls for Europe to adopt Australia’s policy of turning back migrant boats, an Italian navy chief on Tuesday said he would never turn away a boat in need of help.

Admiral Donato Marzano, who will host a seminar of navy supremos from 26 European countries in Naples on Friday, suggested it would not be feasible, morally or practically, to start escorting barely seaworthy migrant boats back to conflict-wracked Libya.

“I am a sailor who has spent 20 years on boats. If I find a boat adrift, I’m sorry but I don’t turn away,” Marzano said.

“I intervene to help people at sea. I don’t know if this reflects my Italian culture but I do know it is international law.”

Aid agencies say a large number of those attempting the Mediterranean crossing have legitimate claims to asylum in Europe as they are fleeing conflict or repression in places including Syria and Eritrea.

On April 19, some 750 migrants were killed when their trawler sank between Libya and southern Italy, sparking global outrage and demands for action.

Four days later EU leaders tripled the bloc’s budget for patrols off Libya and mooted the idea of military action against smugglers. The latter option is seen as unlikely to secure the UN approval it would require.