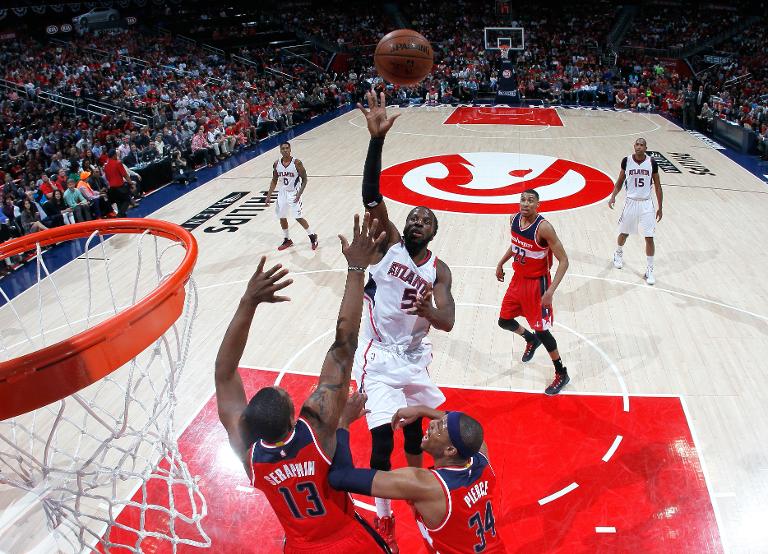 The Atlanta Hawks downed the Washington Wizards 106-90 to even their NBA second-round playoff series at one game apiece.

DeMarre Carroll led the Hawks with 20 points and Al Horford and Paul Millsap scored 18 apiece for top-seeded Atlanta as they pulled level in the best-of-seven Eastern Conference set.

“Defense was the difference,” Carroll said. “It is defense that gets us going, and the intensity was a lot better.”

Millsap and Horford combined for 11 assists, with Millsap pulling down a game-high 11 rebounds as the Hawks made the most of the injury absence of Wizards point guard John Wall.

Wall missed the game with a wrist injury suffered in game one of the series, in which the Wizards shocked the Hawks 104-98.

Wall, who had posted four straight double-doubles, was scratched from game two less than an hour before tip-off.

“The swelling was too much for him to handle today,” Wizards coach Randy Wittman said.

Ramon Sessions, starting in place of Wall, led the Wizards with 21 points. Bradley Beal finished with 20 points while Paul Pierce and Otto Porter had 15 points apiece for a Washington team that suffered their first defeat of these playoffs.

The Wizards will try to regain the series lead when they host game three on Saturday.

In Western Conference action, Memphis point guard Mike Conley shook off the lingering pain of a facial fracture to lead the Grizzlies to a 97-90 victory over top-seeded Golden State on the Warriors’ home floor in Oakland.

The Grizzlies knotted the series at one game apiece as they handed the Warriors their first home defeat since late January.

Conley had missed three games since he was hurt in game three of the Grizzlies’ first-round win over Portland, when he took an inadvertent elbow to his left eye.

He admitted that his 27 minutes on the floor felt more like 50.

But with a clear plastic protective mask over his still-bruised face he scored 22 points, and his defensive effort helped limit Golden State’s newly crowned NBA Most Valuable Player Stephen Curry to 19 points.

“I thought Mike Conley had tremendous heart,” Grizzlies coach David Joerger said. “Day-in, day-out he’s gotten a little bit better, but you never have the expectation that he’s going to go back in and be who he was two weeks ago right away the first night out.”

Conley got a scare midway through the second quarter when Draymond Green hit on his protective mask trying to force a jump ball.

“I got hit a couple of times and after that I knew what it felt like and just kept playing through it,” he said.

Zach Randolph scored 20 points and pulled down seven rebounds, while Marc Gasol and Courtney Lee added 15 points each for the Grizzlies, who took full advantage of 20 Warriors turnovers.

Memphis will try to take the lead in the series when they host game three on Saturday.