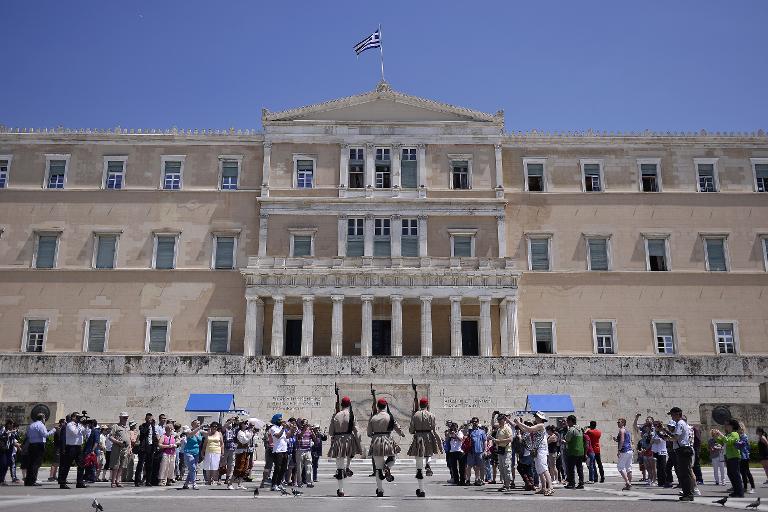 Greece and its creditors on Tuesday ruled out any bailout deal to avoid bankruptcy at a make-or-break meeting next week, as the IMF said Athens may need debt relief to survive its crisis.

Athens blamed divisions between its international creditors for a three-month impasse in talks aimed at unblocking 7.2 billion euros ($8.1 billion) in bailout cash.

Hoping to win breathing space and to avoid a possible catastrophic exit from the eurozone, Finance Minister Yanis Varoufakis led a high-level delegation on a tour of European capitals.

Ahead of a meeting of eurozone ministers on Monday in Brussels, hopes had been high for an end to the standoff over the radical left government’s refusal to implement reforms in exchange for the funds.

But with payments of about one billion euros ($1.1 billion) to the IMF due over the next few days, Greece furiously blamed the creditors for a hold-up that daily increases the risk of Athens leaving the euro.

“Serious divergences and contradictions between the creditors, the European Union and International Monetary Fund, are hindering the negotiations” with Athens, the Greek government said in a statement.

Greece said this was “the exclusive responsibility” of the EU and IMF, which have together supplied the two bailouts that debt-hit Greece has had since 2010.

Reports said that at the heart of the row are IMF rules under which the fund can only support countries whose debt is judged to be sustainable, and that doubts over Greece were growing.

The IMF said in a statement that in order to make Greece’s debt sustainable, the country may need debt relief, but rejected reports that the IMF had pushed for that at last month’s eurozone meeting in the Latvian capital Riga.

“IMF European Department Director Poul Thomsen pointed to the tradeoff that needs to be made… namely that the more distant the measures agreed and targets are from the original commitment in 2012, the higher would be the need for additional financing and debt relief,” the statement said.

Varoufakis visited Paris and Brussels on Tuesday to drum up support for Athens but emerged saying that he expected no deal.

The outspoken university professor, who has been increasingly scorned by his counterparts in the Eurogroup of eurozone finance ministers, said communications with the other ministers had been “difficult”.

“There are many of us and we can’t discuss amongst one another,” he said after meeting French Finance Minister Michel Sapin.

Varoufakis heads to Rome and Madrid later this week for further talks.

Germany’s powerful Finance Minister Wolfgang Schaeuble — one of the harshest critics of Greek Prime Minister Alexis Tsipras’s radical government — had already led a wave of scepticism over whether a deal could be found.

“I’m somewhat sceptical whether that’ll be possible by Monday. But I’m not ruling it out,” Schaeuble said.

Euro Working Group President Thomas Wieser, who was also sceptical, told CNBC television: “We’ve got another good month in which we can come up with a deal.”

“The Greek government’s objective is to reach an agreement, a visible and realistic objective, but that also depends on the institutions, which must act in a constructive fashion,” Dragasakis said after his talks with Draghi.

The Tsipras government, which came to power in January, is resisting intense pressure from Greece’s EU-IMF creditors to pursue radical reforms such as cuts to pensions and wages.

In turn, the creditors’ refusal to release the last tranche of aid funds has forced the anti-austerity government to expropriate funds from local governments and agencies.

The price that Greece has paid for failing to win a deal was laid bare on Tuesday.

Brussels sharply slashed its 2015 growth outlook for Greece to 0.5 percent, a huge slump from its earlier prediction of 2.5 percent.

The EU’s Commissioner for the euro, Valdis Dombrovskis, warned that even this “meagre” growth rate was conditional on Athens securing a deal by June.

Greece’s debt, already the highest in the eurozone, would meanwhile soar to 180.2 percent of annual economic output this year while unemployment is set to remain sky-high at about 25 percent, the EU said.