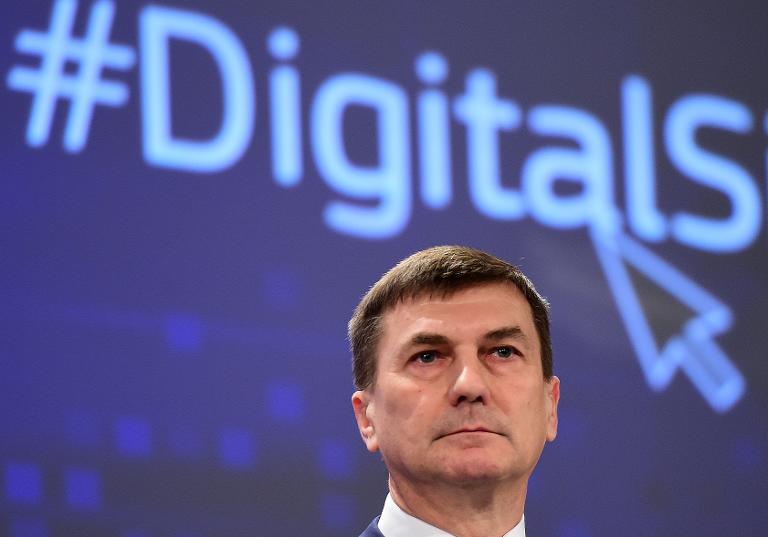 The EU opened a new front Wednesday in its battle with Internet firms like Amazon and Google as part of a wide-ranging digital strategy aimed at making Europe more competitive with global rivals.

Brussels launched an anti-trust inquiry into the European online shopping sector amid concerns that US companies in particular are distorting the 28-nation bloc’s cherished single market.

The probe is the spearhead of a digital market strategy unveiled by the European Commission that aims to tear down cross-border barriers faced by many consumers when they go online.

Digital commissioner Guenther Oettinger said it was “crucial” to create a strategy for Europe so it keeps pace with the rest of the world, adding that “the US has a strategy, like South Korea, China, and Japan”

Consumer groups welcomed much of the plan but warned that it would be meaningless if European leaders failed to follow up the recommendations from the Commission, the executive arm of the EU.

A key part of the strategy tackles “geoblocking”, the practice whereby firms stop online consumers seeking cheaper prices abroad for services such as car hire or travel, or prevents them using streaming services such as Netflix and BBC iPlayer when they travel.

While some sites use it to protect copyright and it also limits access to gambling sites that are illegal in some countries, the EU says it blocks access for legitimate users simply because they are in another geographic location.

“We already know that this problem is really big and we have to find a solution,” European Commission Vice President Andrus Ansip said as he unveiled the strategy alongside Oettinger.

The strategy also deals with issues such as copyright, Internet piracy and illegal content, the use of personal data, and cross-border parcel delivery prices, which affects firms like Amazon.

Meanwhile the competition probe into the e-commerce sector comes after a string of EU investigations into individual US firms which have raised deep suspicions in Washington over EU trade regulation.

Unlike those inquiries, Wednesday’s probe deals with the entire e-commerce sector in Europe, and whether “competition may be distorted within the internal market” by the big firms.

The Commission did not mention any firms by name but said the probe will focus on areas such as electronics, clothing, shoes and digital content which so-called e-commerce is most used for.

The inquiry is expected to deliver a preliminary report by mid-2016 and a final report by March 2017.

It could lead to further cases against specific firms, the Commission said.

Amazon said in a statement that it “looks forward to working with the Commission” but insisted that it plays by the rules.

“Amazon has approached Europe as a single market since we launched here more than 15 years ago,” it said, adding that it had websites in five different languages with 28 delivery centries across the EU.

The probes have caused tensions, with one US official commenting that “if Google had a French name the Commission wouldn’t touch it.”

The inquiry was originally trailed in March by EU Competition Commissioner Margarethe Vestager in March, a former Danish minister who has taken on a series of anti-trust initiatives since starting the job in November.

She cited the fact that she could not watch her favourite Danish channels on her tablet in Brussels and gave the example of a French tourist who can buy Italian shoes while in Rome but has to go through a French website to buy them from home.

The EU has talked up the economic benefits of a proper digital single market across all 28 countries, especially at a time when the eurozone is still struggling for major growth.

It says it could contribute 415 billion euros ($466 billion) a year and create hundreds of thousands of jobs.

At the moment, only 15 percent of consumers shop from another EU country and only seven percent of small businesses sell across borders.

The European Consumer Organisation welcomed the “ambitious” strategy but said its success depended on enhancing competition and protecting consumers.