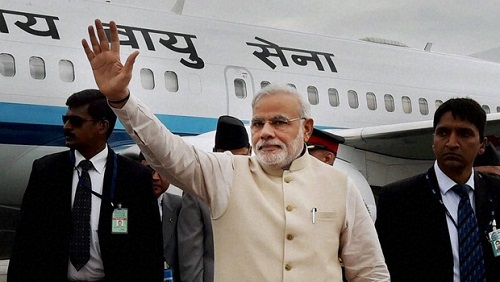 New Delhi: After his foray into the US, Australia, Europe and IndianÂ Ocean countries, Prime Minister Narendra Modi has set his sights onÂ the strategically-importantÂ EastÂ AsiaÂ region. He will pay aÂ three-nation official visit to China, Mongolia and Korea from May 14Â to 19.

The Prime Minister on Tuesday officially announced his visit to ChinaÂ from May 14 to 16 on the micro-blogging website Weibo, saying he isÂ looking forward to have productive discussions with top ChineseÂ leadership.

“Looking forward to visiting China from 14-16 May to strengthenÂ friendship between our two ancient civilisations and the two largestÂ developing countries,” Modi wrote on the Chinese microblog that hasÂ over 500 million users.

“Eagerly awaiting my visit to Xi’an, Beijing and Shanghai and myÂ productive discussions with President Xi Jinping and Premier LiÂ Keqiang,” he said in another post.

This is the first time his visit has been officially announced.Â

According to officials, the visit is aimed at giving a boost to theÂ EastÂ AsiaÂ policy, aligning it with Make in India initiatives andÂ bringing momentum to the countryâ€™s foreign policy in the strategicallyÂ significant region.

In China, the Prime Minister will visit Xian, Beijing and Shanghai.

Modi would kick off his visit from ancient Chinese city of Xi’an whereÂ he would be hosted by President Xi and his wife Peng Liyuan toÂ reciprocate the hometown bonhomie displayed by the Indian leader whenÂ the Chinese leader visited Ahmadabad in September last year.

Xi’an is the provincial capital of Shaanxi province, the home provinceÂ of President Xi.

It is rare for Chinese leaders to receive foreign guests in citiesÂ other than Beijing and according to officials Xi was keen toÂ reciprocate warm and innovative welcome extended by Modi when he
visited India.

In Beijing, the focus will be on boundary issues. Both countries haveÂ an unsettled boundary of 3,488 km that often acts as an irritant toÂ the ties.

He will also hold bilateral meetings with Chinaâ€™s leadership andÂ participate in cultural and business events. Modi will also attend anÂ event organized by the Indian community in China.

Mongolia and India are keen to move forward on the MoU for UraniumÂ supply that the two countries had entered in 2009. Mongolia is keen onÂ Indian helping the country in cyber security. Help in borderÂ patrolling is another area where the two countries will be stepping upÂ the ties.

He will then visit Korea during which he would hold bilateralÂ discussions with President Park Geun-hye besides meeting importantÂ business leaders in Seoul.

Modi’s trip to South Korea may yield a $10 billion financialÂ assistance package for his pet projects of smart cities, Digital IndiaÂ and Swachh Bharat Abhiyan. India is keen on getting investment andÂ going for joint manufacturing in areas where South Korea has aÂ technological edge.

The PM is likely to seek South Korean expertise in shipbuilding, inÂ particular, for Make in India.

With the Modi government keen to improve the state of Indian Railways,Â cooperation in railways is likely to be another key item on the agendaÂ during the PM’s trip. South Korea is keen to work with India toÂ improve existing rail tracks, which will help increase the speed ofÂ trains, a much sought-after goal in India, officials said.