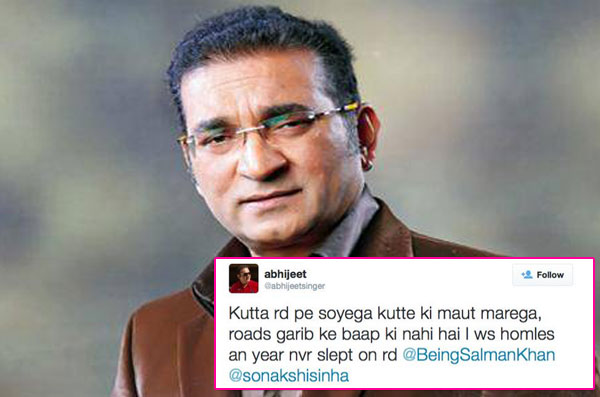 New Delhi: Joining the chorus of millions of Salman Khan fans across the world who could not contain their sorrow after hearing about the verdict of Salman Khanâ€™s 2002 hit-and-run case, Indiaâ€™s high and mighty belonging to Bollywood reacted strongly to the verdict and it clearly shows that they are high on money power and have no sympathy for those killed or injured and their hapless family members in the tragic accident.

While taking sides in a legal case is justified, the reactions of the film fraternity on the Salman Khan verdict clearly shows that they are high on money power and have no sympathy for those killed or injured and their hapless family members in the tragic accident.

While singer Abhijit called the poor victims “kutta” (dog), the verdict also ensured that India got its own ‘Mary Antoinette’ in the form of self appointed jewellery designer Farah Khan.

Refusing to delete his insensitive tweets, Abhijit defended himself on TV channels while blaming victims for the accident. He said that those who sleep on pavements should be prepared to die under the wheels of vehicles and not blame the driver.

Meanwhile, India’s ‘Mary Antoinette’ “arrived” on the day her friend Salman Khan was put behind the bars for a serious crime.

Farah Khan shocked the people by making some of the most insensitive and elitist statements defending Salman Khan.

As somebody said the collective IQ and the misplaced sympathy of the Bollywood fraternity was on full display after a Mumbai court held him guilty and sentenced him to five years in jail.

Like the cruel queen of France, Mary Antoinette, who infamously said “if they don’t have breads, then let them eat cakes”, when somebody told her about the poor people who had no food in France before the French revolution, Farah Khan blamed the poor homeless people for Salman Khan going to jail.

She tweeted that the government should be responsible for housing people and if no one was sleeping on the road in any other country Salman would not have driven over anybody. It was followed by another tweet justifying the killing by equating the drunken hit and run case to that of a normal Railway level crossing accident.

Farah Khan is the daughter of actor and film maker Sanjay Khan. When Social Media erupted in rage against her insensitive comments, she once again tweeted her comments.

Aghast, virtual world hit back at her and the Bollywood fraternity which is rallying behind Salman Khan, who has been sentenced to five years in jail for a serious crime.