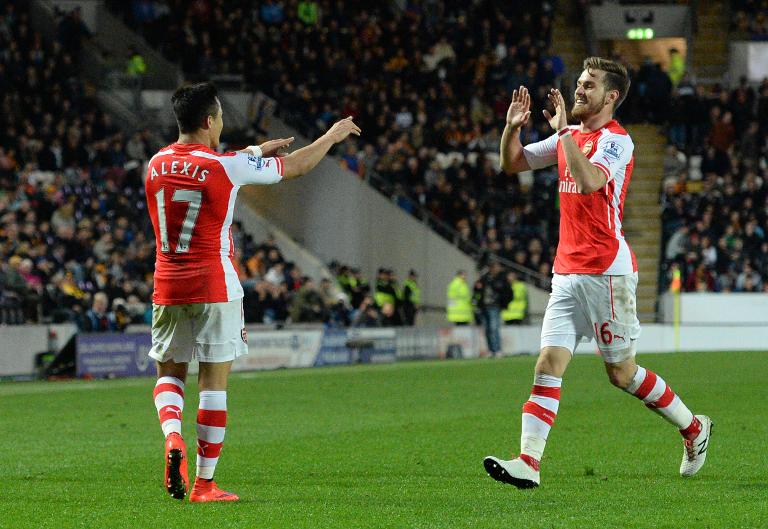 Arsene Wenger has challenged his Arsenal side to finish the season unbeaten and secure second place in the Premier League.

The Gunners cruised to a 3-1 win at Hull City on Monday, their 10th straight match unbeaten all but securing a top-four finish for the 18th successive season.

Chelsea were crowned champions on Sunday but Wenger said finishing second for the first time in a decade was an important target in a campaign that could yet end with holders Arsenal retaining the FA Cup in a Wembley final against Aston Villa later this month.

“For me it makes a difference,” said Arsenal manager Wenger. “We want to finish as high as we can.

“That’s a competitive attitude,” added the veteran French boss who has been in charge of the north London giants since September 1996.

“We’ve secured only top four. Let’s see if we can maintain the run.

“We set ourselves a target to continue to make progress as a team and this was a demonstration that we can improve and keep the quality high. We played the football we love to play for long periods in the game.”

No team has collected more Premier League points than Arsenal in 2015 but inconsistency in the first half of the season proved costly for a club last crowned champions of England 11 years ago.

Asked whether Arsenal could mount a title challenge next season, Wenger said: “Ask me in August. Give me a breather. What is at stake now is to finish second.

“We want to continue to win our games as we’re doing now. I’m not a prophet.

“Football is unpredictable, no one knows how strong teams will be at the start of the season. What is important is to start strong.

“We want to finish as high as we can. It’s about giving your maximum until the last day.

“Not having to think about the Champions League qualifier — it is better for the sleep during the summer,” the 65-year-old Wenger added.

Alexis Sanchez scored twice and Aaron Ramsey was on target as the Gunners cruised into a 3-0 half-time lead.

Stephen Quinn’s header â€“- his first goal of the season -â€“ gave Hull hope but the visitors stayed in control of a match where Arsenal took their goal tally for the season to 100 in all competitions.

“It shows we are an offensive team who likes to win going forward,” Wenger said.

“It’s most important that we have made progress from the start of the season and people look at us in a different way to what they did in September,” he explained.

“We are consistent and passed a few tests in a positive way. It’s important to keep the attitude in the side and improve.”

Steve Bruce’s Hull had beaten Crystal Palace and Liverpool in their previous two matches but this defeat meant they slipped a place to 17th, going below Leicester on goal difference.

However, Hull are still a point above the relegation zone heading into Saturday’s match at home to bottom-of-the-table Burnley, who need a win at the KC Stadium to avoid being demoted to the second-tier Championship.

“We have to respond,” said Hull manager Bruce. “We have to dust ourselves down and get ready for the weekend and the next few games because we are still in there with a shout (of avoiding relegation).

“It (the Burnley game) is not going to keep us up or send us down because there are still two games after that. We still have it all to do and it is a big game, we are aware of that.”