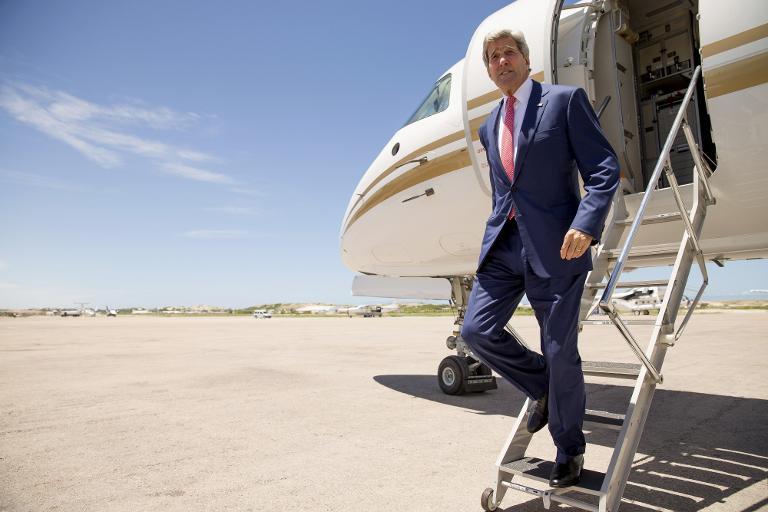 US Secretary of State John Kerry said Tuesday that war-torn Somalia was facing a better future, as he made a landmark visit as the most senior US official to visit since Washington’s doomed military intervention more than two decades ago.

The top US diplomat spent just a few hours in the capital, Mogadishu, and did not venture out of the heavily-fortified airport, where he met Somalia’s internationally-backed President Hassan Sheikh Mohamud and Prime Minister Omar Abdirashid Ali Sharmake.

“More than 20 years ago, the United States was forced to pull back from your country,” Kerry said, referring to the infamous ‘Black Hawk Down’ battle of 1993, when 18 American soldiers and hundreds of Somalis were killed during a military and humanitarian intervention that went wrong.

“I visited Somalia today because your country is turning around,” Kerry said. “Now we are returning in collaboration with the international community and bearing high hopes – but also mixed with ongoing concerns.”

Kerry’s visit was aimed at giving a diplomatic push to Somalia’s fragile government in their fight against Al-Qaeda’s Somalia branch, the Shebab. Despite losing territory, the militants have continued to attack in the capital, across the country, and in neighbouring states.

“The next time I come, we have to be able to just walk downtown,” Kerry said as he met President Mohamud, whose presidential compound — the Villa Somalia — has been a regular target of Shebab suicide attackers.

“Downtown Mogadishu is very different now than it was two years ago,” the Somali president replied, asserting that security was steadily improving and describing Kerry’s flying visit as a “great moment” for the chronically unstable nation.

Kerry promised further US support for Somalia, a country wracked by war and repeated humanitarian crises since the collapse of Siad Barre’s hardline regime in 1991.

“We all have a stake in your success. The world cannot afford to have places on the map that are essentially ungoverned. That is why Somaliaâ€™s return to effective government is an historic opportunity,” Kerry said in a video message to the people of Somalia.

“The United States is prepared to do whatever we can to help Somalia get the security, the prosperity, and the peace that you deserve.”

Kerry thanked Burundi, Djibouti, Ethiopia, Kenya and Uganda which contribute troops to the 22,000 African Union mission in Somalia (AMISOM) that defends the government in Mogadishu and fights the Shebab.

Since 2007 the US has spent “more than half a billion dollars” funding AMISOM, US officials said.

During the same period the US has carried out more than a dozen air and drone strikes against militants, according to the London-based Bureau of Investigative Journalists which tracks US covert operations. In September US missiles killed Shebab leader Ahmed Abdi Godane.

Kerry also met with civil society leaders inside the airport compound, a giant seaside complex ringed by razor wire and blast walls, and which is also the military base of the AMISOM force.

The appointment of President Mohamud in 2012 was supposed to signal the beginning of the end of years of instability with elections due in September 2016.

However, the State Department official said that elections “as we know them” were not going to happen.

“This is not going to be a one-man, one-vote election as we would have hoped it to be,” said the official.

Instead the US is now eyeing “some form of election or selection that is different from what they’ve done before.”

Mohamud was elected by parliamentarians who were hand-picked by clan elders.

In February the US appointed its first ambassador to Somalia in 25 years, although Kerry said there was “no fixed timeline for reopening the embassy” inside Mogadishu, with the ambassador based in Kenya.

Kerry returned to Nairobi on Tuesday evening. He leaves on Wednesday for a visit to Djibouti, a key regional ally and host to US base.