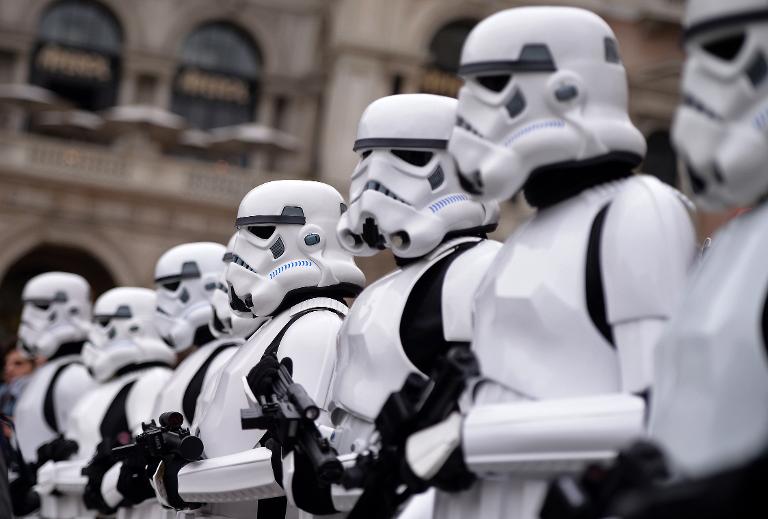 Vanity Fair on Monday unveiled the first photo of a new villain from the upcoming highly-anticipated “Star Wars” film — on a day fans around the world celebrate the blockbuster space saga.

“Girls” star Adam Driver will portray black-clad baddie Kylo Ren in “The Force Awakens” — Episode VII of the mega-franchise, which is due out later this year.

The character was featured in the first teaser trailer for the film released earlier this year, carrying a controversial cross-bar lightsaber, but his face was not visible.

The upmarket weekly also debuted a picture of Oscar-winning actress Lupita Nyong’o wearing motion-capture tracking dots to turn her into the CGI character Maz Kanata, described as a pirate.

The photos in the magazine’s June edition were unveiled on May 4 — a veritable holiday for ‘Star Wars’ fans who greet each other by saying “May the Fourth Be With You” — a pun on the Jedi mantra, “May the Force Be With You.”

“Star Wars” has attracted generations of loyal fans ever since the first film arrived nearly 40 years ago, recounting the adventures of Luke Skywalker, Han Solo and Darth Vader. It is now one of the biggest movie franchises ever.

After a second trilogy of prequel films wrapped in 2005, the movie franchise had lain dormant until Disney shelled out $4 billion to buy creator George Lucas’s Lucasfilm in October 2012.

Disney soon announced plans for three new films in the series, with acclaimed Hollywood director J.J. Abrams being entrusted with the reboot.

“The Force Awakens” — which features classic characters like Skywalker, Solo and Princess Leia, as well as several new faces — is due in cinemas on December 18.