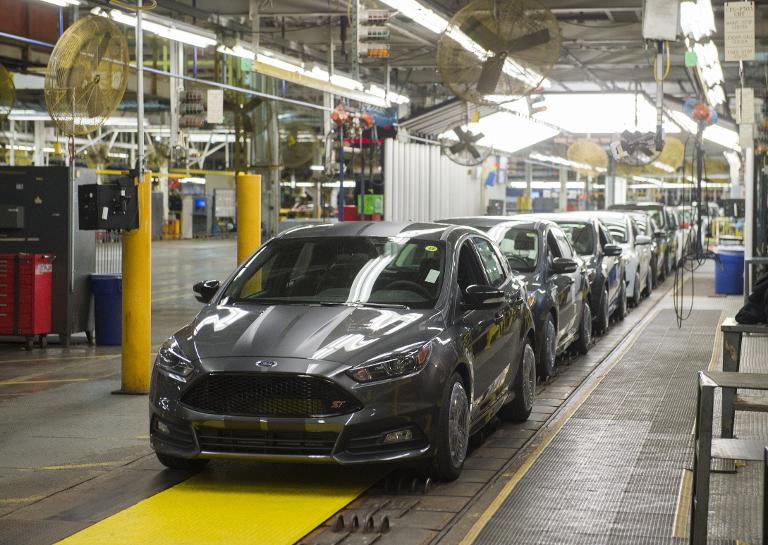 The US trade deficit swelled in March to a six-year high as imports surged after the end of the West Coast port strike and the dollar stayed strong.

The yawning trade gap raised expectations that the initial estimate of first quarter growth in the world’s largest economy could be cut from a weak 0.2 percent annual rate to possibly a contraction, with no momentum heading into the second quarter.

The trade gap was $51.4 billion in March, the largest since October 2008 amid the financial crisis, the Commerce Department reported Tuesday.

The deficit ballooned more than 40 percent from February in the largest month-over-month advance since 1996. The February deficit was $35.9 billion, having fallen sharply from January.

The March deficit roared past analyst expectations of $40.0 billion as the sizzling pace of imports dwarfed exports.

Imports surged 7.7 percent, the largest monthly increase on record, to $239.2 billion from $222.1 billion in February.

Exports edged up 0.9 percent to $187.8 billion amid a sluggish global economy and as the strong dollar made US goods and services more expensive to buy.

The end of the West Coast ports slowdown in late February, in a deal between management and dock workers, unleashed a flood of imports that had been backed up for months.

“Clearance of the backlog from the West Coast port disruptions combined with the effects of a strong dollar led to the widest deficit since 2008,” said Kyle Hillman of Moody’s Analytics.

Petroleum imports fell to $15.4 billion, the lowest since September 2004, helped by lower prices. The average price of imported crude oil was $46.47 a barrel, a level last seen in March 2009.

Goods trade data showed a sharply smaller deficit with Canada, the largest US trade partner, at $762 million in March as the US sold its neighbor more cars and imported oil at cheaper prices.

Meanwhile, the politically sensitive goods trade gap with China soared to $31.2 billion from $22.5 billion, led by imports of cell phones and computers.

Analysts pointed out that the volatility in the February and March trade data were probably largely due to the West Coast port delays, whose impact was fading in March.

“We do not view such a large trade deficit as a new trend for the US,” said Barclays analyst Jesse Hurwitz.

“We do expect the net trade balance to drag on overall growth over the next several quarters as solid domestic consumption coupled with a stronger dollar favor growth in imports.”

Ian Shepherdson of Pantheon Macroeconomics noted the March trade deficit was bigger than what the government estimated in its first-quarter report on gross domestic product growth.

“The economy very probably shrank in the first quarter, as it did last year,” Shepherdson said. “Growth then averaged 4.8 percent in the following two quarters, so no need to be despondent.”