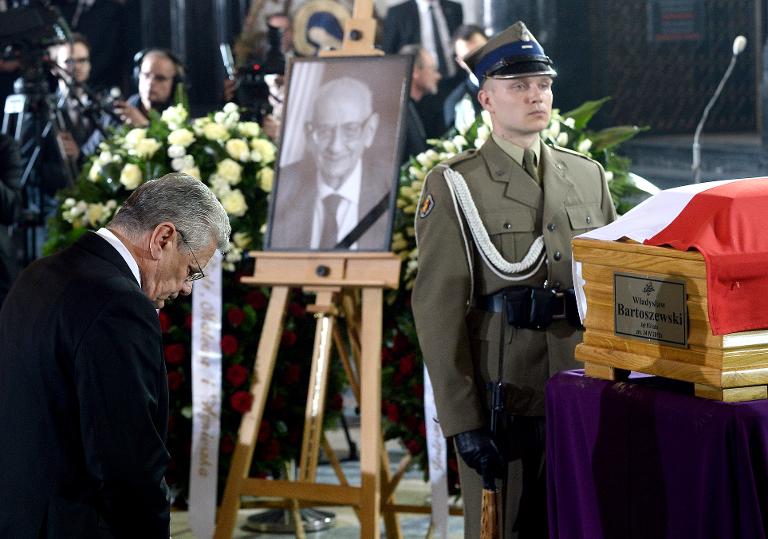 The presidents of Germany and Poland on Monday attended the funeral of Wladyslaw Bartoszewski, an Auschwitz survivor and two-time Polish foreign minister who died last month at the age of 93.

“A former prisoner of Auschwitz and Stalinist prisons, he conveyed the truth about crimes carried out by totalitarian, Hitler and Stalinist regimes,” Polish President Bronislaw Komorowski said at the Warsaw funeral.

He paid tribute to Bartoszewski’s courage and patriotism, while German President Joachim Gauck said “we bid farewell to a friend.”

“As Germans, we bid farewell to a man who held out a hand to us at a time when this gesture was met with strong reservations from both of our countries’ people,” Gauck said.

Considered a moral authority in Poland, he spent his whole life trying to tear down the terrible divisions between Jews, Poles and Germans that World War II had created.

Bartoszewski helped Jews during World War II, for which he received the Righteous Among the Nations honour, a title granted by Israel’s Yad Vashem Holocaust memorial authority to non-Jews who risked their lives to save Jews during the Holocaust.

He was held prisoner at the Nazi-German death camp Auschwitz because of his wartime resistance and fought the occupying Nazis during the ill-fated Warsaw Uprising of 1944, one of the war’s bloodiest episodes.

He was later jailed by Poland’s post-war communist regime before going on to become the country’s top diplomat after the collapse of the Soviet Union.

Bartoszewski began his diplomatic career at the age of 68 as Poland’s ambassador to Austria before serving as foreign minister in 1995 and 2000-2001.

He remained active well into his old age, serving as an advisor to Prime Minister Ewa Kopacz until his death.