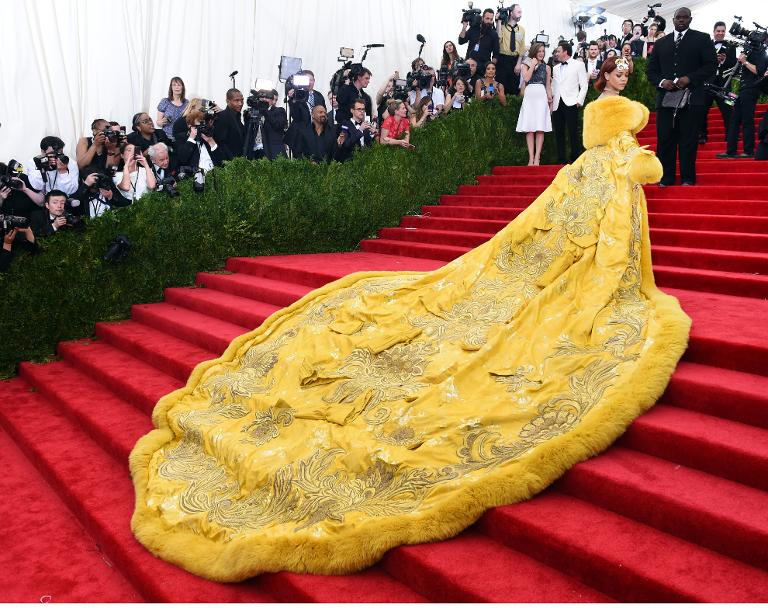 China’s march towards global ascendancy has taken another leap forward — at least when it comes to New York high society and its most glittering fashion extravaganza, the Met Ball.

The city’s party of the year, attended by A-list film stars, singers and models, the richest moguls and most feted fashion designers, has chosen China as the theme of its 2015 bash at The Metropolitan Museum of Art on Monday.

For Chinese actress Li Bingbing — “so excited” to be going for the first time — it shows that Western attitudes towards her country, for so long a communist bogeyman in the United States, are beginning to change.

“Nowadays China is the hot topic,” she told AFP in an interview at her luxury hotel before embarking on three hours of preparation with an army of assistants she acknowledges is needed to grace the red carpet.

“People love to talk about China, people are curious and want to know the interest in Chinese culture,” she adds in hesitant, but exuberant English.

The ball is the annual fundraiser for the museum’s Costume Institute and kicks off the exhibition “China: Through the Looking Glass,” which explores Chinese influences on Western fashion.

It positions haute couture from some of the world’s most celebrated designers alongside works of Chinese art, with the focus on Imperial China, 1920-40s Shanghai and the People’s Republic of China.

The ravishing 42-year-old actress Li, who opted to wear Christian Dior haute couture, is delighted that China is the theme, pointing to the wealth in Chinese history and how much it can still be misunderstood in America.

She tells of encountering stereotypes as recently as promoting 2011 film “Snow Flower and the Secret Fan” in the United States.

“I met some Americans. You know what, they thought nowadays that Chinese women still have feet binding,” she said.

“It’s completely a huge change in China now. Women in China are very, very independent and capable and hard working.”

All that makes China a fast-growing luxury market for designer clothes. Vogue China is celebrating its 10th anniversary, for which Li was photographed by Mario Testino on the eve of the ball.

Hollywood is also opening its doors to China.

Li played a Chinese scientist in 2014 blockbuster “Transformers: Age of Extinction,” which grossed $320 million at the box office in China, eclipsing the $245 million made in the United States.

The Costume Institute reopened last year and was named after Vogue editor-in-chief Anna Wintour, who has raised more than $125 million for the center since becoming trustee of the Met in 1999.

Under her stewardship, the benefit has become a benchmark for international style and a commercial success for Vogue.

Attendees pay $25,000 for a single ticket or $175,000 for a table of 10, according to The New York Times, which said last year’s ball generated almost $12 million and attracted over 25 million page views on vogue.com.

Li says Wintour, whom she has met “several times,” is her fashion icon. “I think she’s cool. She is my idol. I love her so much.”

Nervous about speaking in English, she conferred with her assistants at times to find the right expression in English and then meticulously rolled the words in her mouth to practice pronunciation.

She ranks number 28 on Forbes’ China celebrity list, is a goodwill ambassador for the United Nations and last year became the first Asian actress to give a speech on climate change during the UN General Assembly.

Now, she says, she is looking for love.

Bubbly, charming and fiercely intelligent, she radiates a sense of fun and seemed perturbed over reports that selfies and cell phones are banned from the ball.

“I think tonight, if they don’t allow people to do that, it’s going to be a little bit pity,” she said.

But then again, this is the ball that Hollywood actress Gwyneth Paltrow told USA Today in 2013 was so “un-fun” that she would never go again.