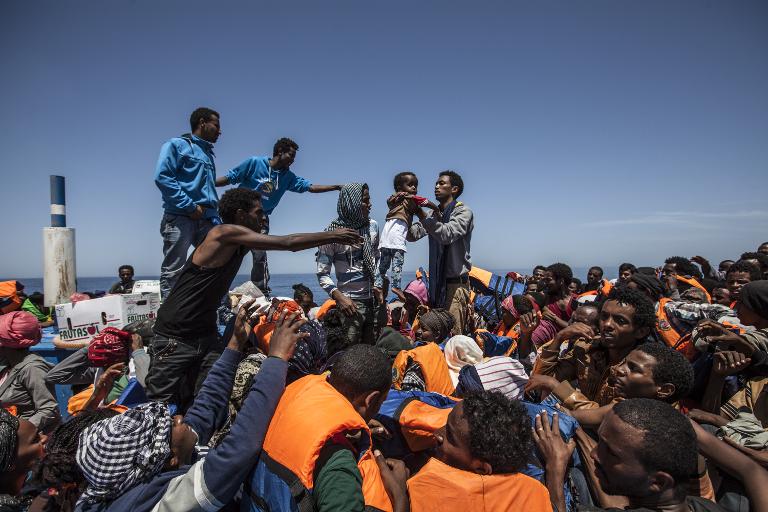 Italy reacted Monday to the arrival of thousands of new migrants at its southern ports by demanding that its European Union partners meet the cost of taking them in.

Speaking after the weekend rescue of nearly 6,000 migrants in the Mediterranean, Foreign Minister Paolo Gentiloni said promises made at last month’s EU summit after a migrant boat disaster left 750 dead had to be honoured.

“The EU summit finally confirmed the European character of the migrant issue in the Mediterranean but now we need meaningful steps,” Gentiloni told the European Commissioner for Migration, Dimitris Avramopoulos, in a telephone conversation, the foreign ministry said.

“In particular, as well as the reinforcement of (border agency) Frontex, Italy expects an extraordinary economic commitment from the European Union to help it meet the urgent needs linked to the reception of migrants.

“A European emergency cannot continue to have only Italian responses.”

Gentiloni’s outburst came on a day when more than 3,000 migrants landed in southern Italian ports, most of them having been rescued by the country’s coastguard or navy on Saturday or Sunday.

A baby girl born on board the Italian navy patrol ship Bettica was among them. Her mother had gone into labour just before leaving Libya aboard one of four barely seaworthy boats whose occupants were rescued by the Bettica.

Mother and baby were transferred to hospital on arrival but were both reported to be doing well, the navy said.

Not everyone was so lucky. At least 10 migrants died, adding to an estimated total of more than 1,750 people who have perished in the waters between Libya and Italy since the start of this year.

This weekend’s surge in the number of boats leaving Libya was put down to the fine weather and calm sea conditions and will have confirmed the fears of Italian officials who anticipate a record number of arrivals on their southern shores between now and September.

Last year’s total of 170,000 was already unprecedented and current trends point to that figure being exceeded in 2015.

Among the ships involved in rescue ops at the weekend was the Malta-based M.Y. Phoenix, run jointly by private body Migrant Offshore Aid Station and Medecins Sans Frontieres/Doctors Without Borders.

The Phoenix, on its first mission of the year, was involved in the rescue of more than 470 people between Saturday and Monday morning, including several pregnant women and babies and a total of 45 children.

MSF doctors treated migrants suffering from injuries sustained during beatings by people smugglers and others suffering from conditions including diabetes, dehydration and skin infections, as well as carrying out checks on the pregnant women.

MSF’s Will Turner added: “The boat was absolutely crammed full. As the men, women and children we rescued curled up under blankets to sleep, there wasn’t a centimetre to spare. The scale of this crisis is just heartbreaking. I wish we could do more.”

The migrants landed in southern Italy will quickly be dispersed to reception centres across the country pending decisions on their future.

Aid agencies say a large number of those attempting the Mediterranean crossing have legitimate claims to asylum in Europe as they are fleeing conflict or repression in places including Syria and Eritrea.

In a rare example of conflict-wracked Libya attempting to stem the migrant flow, five boats which set off at the weekend were intercepted by the Libyan coastguard and sent to the city of Misrata, home to a detention centre for migrants. Libya confirmed Monday it was holding around 7,000 migrants in detention centres awaiting deportation.

Australian Prime Minister Tony Abbott meanwhile claimed that his officials were talking to European Union counterparts about how to stop the migrant flow, fuelling speculation Europe could be contemplating deploying naval vessels to send the migrant boats back, a tactic used successfully but controversially by Abott’s government.

The European Commission, the executive of the 28-nation EU, said it was not aware of any talks with the Australians.

Australia’s approach has virtually eliminated migrant arrivals and deaths at sea but critics accuse the government of reneging on the country’s international obligations on asylum and other human rights.

People smugglers have taken advantage of the chaos gripping Libya since the 2011 uprising that toppled dictator Moamer Kadhafi.

On April 19, some 750 migrants were killed when their trawler sank between Libya and southern Italy, sparking global outrage and demands for action.

Four days later EU leaders tripled the bloc’s budget for patrols off Libya and mooted the idea of military action against smugglers. The latter option is seen as unlikely to secure the UN approval it would require.