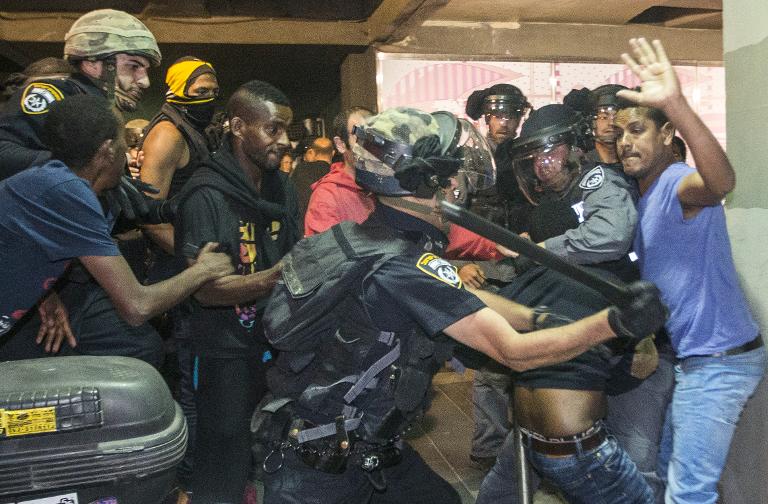 Israel on Monday pledged to crack down on racism and discrimination against Ethiopian Jews as officials sought to ease tensions after a series of angry protests over police brutality.

Last week, years of simmering anger within the Ethiopian minority exploded into anger during a protest in Jerusalem sparked by a video showing two police assaulting an Ethiopian soldier in uniform.

A second demonstration in Tel Aviv on Sunday also deteriorated into violence, throwing a spotlight on the plight of Israel’s Ethiopian community.

President Reuven Rivlin admitted “mistakes” had been made, and Prime Minister Netanyahu held a three-hour meeting with community leaders.

“We must stand together as one against the phenomenon of racism, to denounce it and eliminate it,” Netanyahu said, admitting there was a “deep problem” that needed to be addressed.

The protests, which saw thousands of angry Ethiopian Jews marching through the streets of Jerusalem and Tel Aviv, were the result of “real distress,” he acknowledged after meeting the soldier in the video, Damas Pakada.

The United States also weighed in with Secretary of State John Kerry saying in Nairobi he was “confident” Israel would probe violence against Ethiopian Jews.

Images of the assault on Pakada were what sparked the first demonstration on Thursday with about 1,000 people calling for an end to police brutality and discrimination.

A much larger gathering of what police said was 3,000 Ethiopian Israelis marched through Tel Aviv on Sunday with police using stun grenades, water cannon and pepper spray to disperse the crowd.

Organisers put the number of demonstrators at closer to 10,000.

Forty-three people were arrested on suspicion of rioting and attacking police in one of the most violent protests in Israel for years, raising fears of further confrontation with the country’s 135,000-strong Ethiopian Jewish community.

The community, which immigrated in two waves in the mid-1980s and early 1990s, has long complained of political and economic marginalisation.

“These demonstrations should bring the responsible authorities to their senses so they realise… there is a problem: that there are discrimination and racism issues in Israel,” said Fentahun Assefa-Dawit, head of the advocacy organisation Tebeka.

Speaking to reporters ahead of meeting the prime minister, Assefa-Dawit said the protests expressed the “deep pain” felt by a community which had suffered from years of police brutality.

“Although there has been police violence against the Ethiopian community for many years… it was very, very difficult to prove,” he said, calling on Netanyahu to act “before it’s too late”.

“I love this country and I want my children to have a future here, but today I feel more black than Jewish because the state has made us second-class citizens.”

Rivlin admitted Israel had made errors, describing the suffering of the minority as “an open and raw wound at the heart of Israeli society”.

“We have made mistakes. We did not look, we did not listen enough,” he said.

But Kerry said in Nairobi on Monday: “I’m confident that Israeli leadership will work this through in a way that honours the goals, and aspirations and traditions and values of the people of Israel”.

For centuries, Jews in Ethiopia were largely cut off from other Jewish communities, and Israel’s religious authorities only belatedly recognised them as members of the faith.

They were allowed into Israel from 1984 under the Law of Return, which guarantees citizenship to all Jews, in an operation that was largely completed by 1991.

Since then they have consistently complained of discrimination, bemoaning salaries lower than other Israelis and much higher rates of incarceration, particularly among young people.

Their grievances where highlighted in 2013 when Israel’s equivalent of the Red Cross refused to accept blood from an Ethiopian Jewish MP, citing a blanket ban on donations from anyone born in Africa.