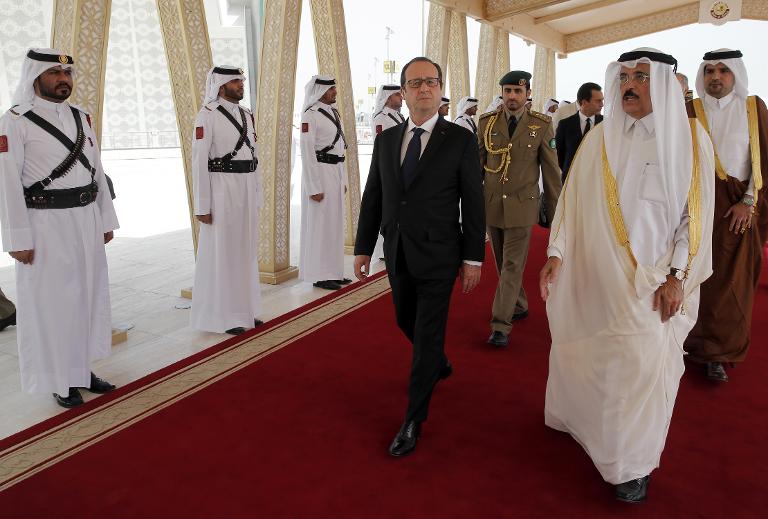 French President Francois Hollande sought to boost ties in the Gulf Monday as he oversaw the signing of a warplanes deal with Qatar and arrived in Saudi Arabia for a summit.

Hollande was to be the first Western head of state to attend a Gulf Cooperation Council leaders’ meeting when they gather in Riyadh on Tuesday.

The extraordinary summit comes at a crucial time for the six-nation GCC, with a Saudi-led coalition bombing rebels in Yemen, concern over the rise of Islamist militants and regional worries over a potential final nuclear deal with Iran.

The agreement includes an order for 24 Rafale fighter jets, with an option on a further 12.

“Good choice,” Hollande said as the deal was signed.

“If we are present here in Qatar… it is because there has been a long tradition, and because France is seen as a reliable country which a partner country can have confidence in.”

Having struggled for years to sell any Rafales abroad, Dassault has recently scored several lucrative high-profile contracts with Egypt, India, and now Qatar.

At the signing ceremony, Hollande hailed France’s ties with Gulf countries and his invitation to the GCC summit.

“It is an honour for France, a sign of friendship and of confidence,” he said.

All but Oman are members of the Saudi-led coalition that launched air strikes in Yemen in late March against Iran-backed Huthi Shiite rebels and their allies after they seized control of large parts of the country including the capital Sanaa.

Hadi fled Yemen as the rebels advanced on his southern refuge of Aden, and anti-government forces have refused to concede territory or down arms despite international pressure.

On Sunday, Yemeni sources said the coalition had sent a “limited” ground force of several dozen soldiers to assist pro-government fighters in Aden.

The GCC is expected to discuss what steps can be taken as the rebels hold out despite weeks of air strikes.

International concern has been growing over the conflict, which has seen at least 1,200 people killed since late March and thousands wounded.

The UN has repeatedly warned that already impoverished Yemen faces a major humanitarian crisis, and Action Against Hunger on Monday urged Hollande to push for a ceasefire.

“Faced with the current disaster, there is now a humanitarian imperative that must take precedence over any political or military objective,” said the French aid group.

It called on Hollande “to do everything possible to obtain a ceasefire and unhindered access for humanitarian assistance”.

Most GCC nations are also members of the US-led coalition bombing Islamic State group jihadists in Syria and Iraq, and Tuesday’s summit will lay the groundwork for talks between the group’s leaders and US President Barack Obama at the White House later this month.

Obama is expected to reassure GCC members on the framework accord reached on Tehran’s contested nuclear programme.

Saudi Arabia and other GCC nations fear regional rival Iran will continue efforts to develop an atomic bomb after the sanctions that are strangling Iran’s economy are lifted under the deal.

Tehran denies any attempt to develop a nuclear weapon.

The only other foreign leader invited to a summit of the 34-year-old GCC was Iran’s then-president Mahmoud Ahmedinajad, in 2007.

The French presidency said a joint French-Saudi declaration touching on political, economic, strategic and military affairs will be signed.