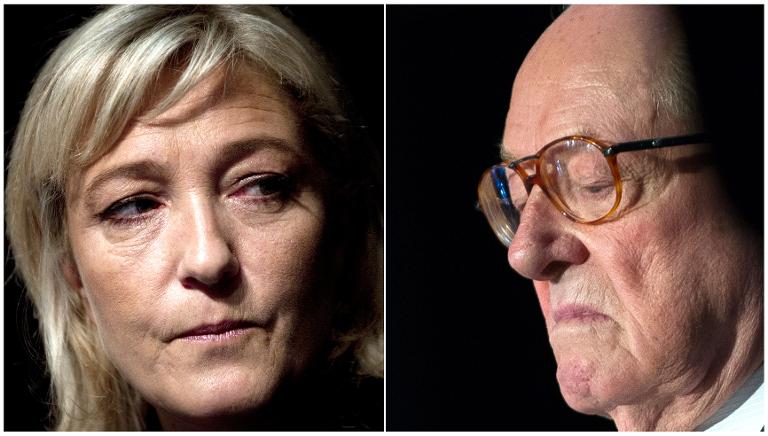 France’s far-right National Front (FN) on Monday suspended founder Jean-Marie Le Pen over a string of controversial remarks and amid a deepening feud with his daughter Marine, who now leads the party.

A disciplinary meeting of the party executive was called after the 86-year-old repeated comments stating that the Nazi gas chambers were merely “a detail of history” and said he wanted to defend the “white world”.

A special meeting of FN members will be called within three months to decide whether to strip him of the title of honorary president, the party said in a statement.

A furious Le Pen described his suspension as a “criminal act” and said he wanted to disown his daughter, ordering her to “give up her name”.

He warned party officials should expect him to use “any means” to fight the decision.

The far-right patriarch showed up on Monday for a meeting at the FN headquarters in Nanterre, west of Paris, to discuss upcoming regional elections.

But he refused to stay for the disciplinary hearing that was called by his daughter, who took over the leadership in 2011.

Le Pen senior said the hearing was “detrimental to my dignity”.

He told reporters there was no question of his retirement, saying “they will have to kill me” to silence him.

On Sunday, Marine Le Pen said that her father no longer spoke for the anti-immigration party, which opposes France’s membership of the European Union.

“Jean-Marie Le Pen should no longer be able to talk in the name of the National Front, his comments are against the fixed (party) line,” she told French radio.

Marine Le Pen has been actively trying to distance the party from its racist and anti-Semitic image as she plans her bid for the next French presidential election in 2017.

The relationship between her and her father has been particularly rocky in recent months.

Six months ago, Marine stormed out of her father’s house after his Doberman dog savaged her Bengal cat to death.

Since his recent slew of controversial interviews, the remaining ties appear to have snapped.

The elder Le Pen was conspicuously dropped from a line-up of National Front leaders on stage during the party’s traditional May 1 rally in Paris.

But determined to upstage his daughter, he nevertheless strode uninvited onto the podium to take the ovation of the crowd.

“I think that was a malicious act, I think it was an act of contempt towards me,” Marine said on Sunday.

“I get the feeling that he can’t stand that the National Front continues to exist when he no longer heads it.”

In late April, French prosecutors said they would examine allegations that the FN founder hid 2.2 million euros ($2.4 million) in a secret account in Switzerland.

Jean-Marie Le Pen has also been under investigation since 2013 over a 1.1-million-euro discrepancy between his 2004 and 2009 asset declarations.

A separate probe also under way focuses on FN campaign financing since Marine Le Pen’s takeover in 2011 — with five people and the events company Riwal already charged — while the party has also been referred to the EU’s anti-fraud agency.

The spat between father and daughter broke out last month after Le Pen repeated earlier comments about the Nazi gas chambers and praised France’s World War II leader Philippe Petain, who collaborated with the Nazis.

His daughter called the comments “political suicide” and said she would not support her father’s bid for the regional polls.

It was announced that his 25-year-old granddaughter Marion Marechal Le Pen, who is already a member of parliament, would stand in his place.