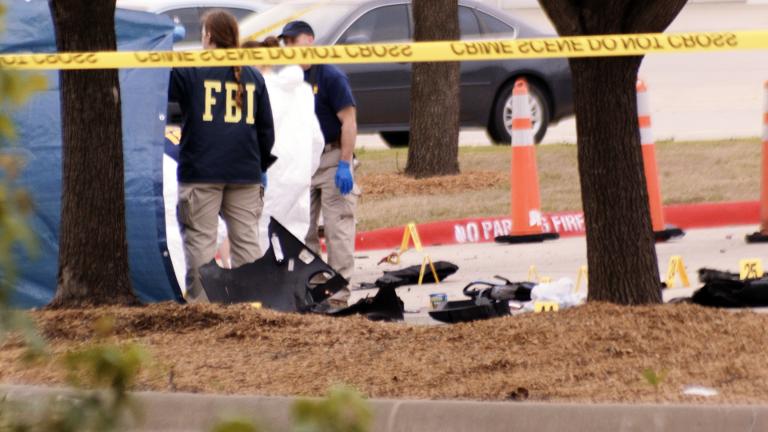 One of the men shot dead by police when he and an accomplice attempted to storm an event hosted by an anti-Muslim group in Texas was investigated by the FBI over alleged plans to wage holy war, court documents show.

Investigators were delving into the backgrounds of the two suspected Islamist gunmen — they were roommates, The Los Angeles Times reported — who opened fire with assault rifles outside Sunday’s controversial exhibit of cartoons depicting the Prophet Mohammed.

A quick-acting Texas policeman shot the two suspects before they were able to enter the venue in Garland, a suburb of Dallas.

There was no confirmed claim of responsibility for the failed attack, but several US media identified the shooters as 31-year-old Elton Simpson and 34-year-old Nadir Soofi.

The pair shared an apartment in Phoenix, Arizona, the LA Times said, and CNN broadcast footage of FBI agents raiding the alleged address.

And in court records seen by AFP, Simpson was sentenced to three years’ probation in 2011 after FBI agents presented a court with taped conversations between him and an informant discussing travelling to Somalia to join “their brothers” waging holy war.

The prosecution was unable to prove that Simpson had committed a terror-related offense, but did establish he had lied to investigators when he denied having discussed going to Somalia.

Private terror watchdog SITE said that at least one Twitter account linked to a known militant of the Islamic State jihadist group has claimed the attackers as sympathizers. But Simpson’s father said his son had simply “made a bad choice.”

The White House said that President Barack Obama had been briefed on the investigation, which Texas police said was ongoing.

“There is no form of expression that justifies an act of violence,” White House spokesman Josh Earnest said.

At the event, attended by Dutch far-right politician Geert Wilders and AFDI co-founder Pamela Geller, supporters held an exhibition of entries to a competition to draw caricatures of the Prophet Mohammed.

Many Muslims find drawings of the prophet to be disrespectful or outright blasphemous, and such cartoons have been cited by Islamists as motivation in several previous attacks.

AFDI had offered a $10,000 prize for the winner of the contest, which was billed as a “free speech” event.

Police said two men wearing body armor and toting assault rifles drove up to the conference, jumped out and opened fire on an unarmed security guard.

Garland police spokesman Joe Harn told reporters the guard was shot in the ankle and that a traffic police officer in the vicinity responded, taking down the two better-armed assailants.

Commentators were quick to draw parallels to a January mass shooting at the French satirical weekly Charlie Hebdo in Paris that killed 12 people and wounded 11 more.

caricatures of the Prophet Mohammed “There is absolutely no comparison,” Jean-Baptiste Thoret, the magazine’s film critic who only avoided the attack because he had been late for work — told Charlie Rose on PBS, according to an advance transcript Monday.

“You have a, as you said, a sort of anti-Islamic movement (in Texas)… the problem of Charlie Hebdo is absolutely not the same,” added Thoret, flanked by Gerard Biard, chief editor of the magazine.

Biard added: “We donâ€™t organize contests. We just do our work. We comment on the news. When Mohammed jumps out of the news, we draw Mohammed.

“But if he didnâ€™t, we didnâ€™t. We donâ€™t… We fight racism. And we have nothing to do with these people.”

On Twitter, jihadist Abu Hussain Al-Britani, who SITE identified as British IS fighter Junaid Hussain, described the gunmen as “two of our brothers.”

But Simpson’s father Dunston told ABC News that his son, who he said worked in a dentist’s office, simply “made a bad choice.”

“We are Americans and we believe in America,” Dunston Simpson said. “What my son did reflects very badly on my family.”

Wilders told AFP in an e-mail that he was concerned he may have been targeted because he, like one of the Charlie Hebdo cartoonists killed in January, is on a hit list circulated by Al-Qaeda supporters.

“I am shocked. I just spoke for half an hour about the cartoons, Islam and freedom of speech and I had just left the premises,” he said.

“This is an attack on the liberties of all of us.”

The Dutch politician said he would return to the Netherlands but plans to come back to the United States next week for another speaking engagement.

Geller called the shooting a “war on free speech.”