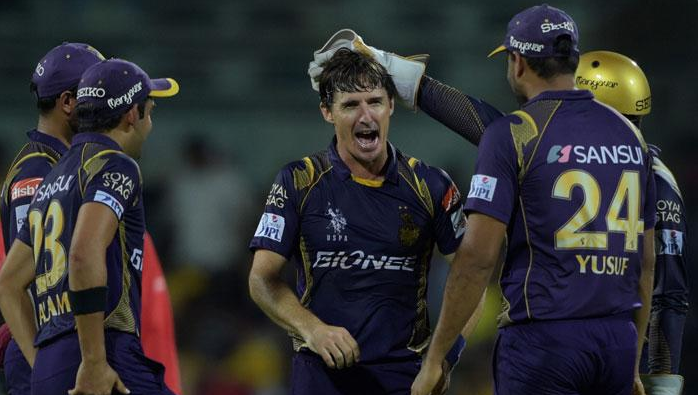 Kolkata:Â Kolkata Knight Riders bounced back in the home leg in style by notching up a comprehensive 35-run victory over Sunrisers Hyderabad in the Indian Premier League (IPL) cricket in Kolkata on Monday.

Defending a fighting total of 167, KKR were given a rollicking start by their speedster Umesh Yadav, who castled dangerman David Warner (4) and Naman Ojha (0) in the first over, and the visitors failed to recover from the double blow to finish at 132 for nine.

The KKR spin duo of Brad Hogg (2/17) and Piyush Chawla (1/16) tightened the noose further around SRH, handing them their third defeat in as many outings at the Eden Gardens.

While their top batsmen failed to impress, Moises Henriques (41 from 33 balls) and Karn Sharma (32 from 20) put up a fight, but it proved to be too late, too little for Sunrisers.

KKR (11) jumped past Royal Challengers Bangalore (9) to the third spot in the table, brightening their hopes of qualifying for the play-offs. The big win also gave a fillip to their net run-rate.

The defending champions next play Delhi Daredevils (May 7) and Kings XI Punjab (May 10) to conclude their home leg.

SRH, on the other hand, remained on fifth position with eight points from nine matches.

It was another welcome homecoming for KKR, who know how to win at the Eden, and everything fell in order even as none of their batsmen could convert their starts after being put in by SRH skipper David Warner.

From 55 for no loss in the first six overs the hosts were reduced to 86/3 in 12 with the Sharma duo — Karn and Bipul — conceding just 52 runs between them in eight overs while taking the crucial wickets of Gautam Gambhir (31), Robin Uthappa (30) and Andre Russell (1).

In reply, SRH batting fell like nine pins after Umesh Yadav rocked the top-order with his twin blow in his first over, including the prized scalp of Warner.

The SRH captain, who has struck five half-centuries already this season, got going with a boundary but Yadav bounced back in the next ball to disturb his off stump.

Yadav went on to castle Ojha for a duck in the last ball of the first over to leave SRH reeling at 6/2.