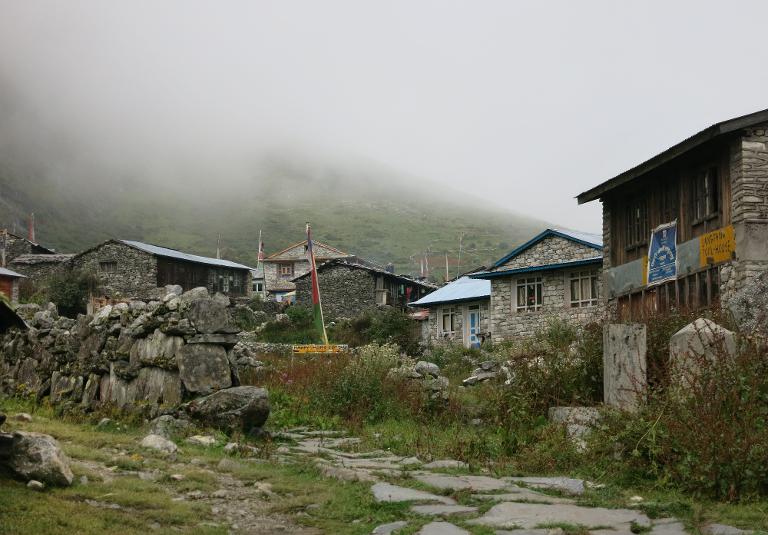 A trekker stranded for days in quake-hit Nepal has said he watched boulders the size of minivans smash buildings in a popular tourist area devastated by a massive avalanche, living to tell the tale using skills learnt from US reality TV show “Survivor”.

American Corey Ascolani described to AFP how he spent five terrifying days in the remote tourist area of Langtang following the April 25 quake, which trapped hundreds of tourists and Nepalis.

“It was very hard to sleep, I remember feeling every vibration in the ground… my nerves were shot, I slept maybe one hour that first night,” Ascolani said in Kathmandu, after he was airlifted to safety.

The 7.8-magnitude quake hit at the height of trekking season, wiping out Langtang’s main village. With information still emerging from the remote area it remains unclear how many people were killed, but local authorities have found 60 bodies including 13 foreigners.

They estimate there could be more than 150 Nepalis and 100 tourists buried in Langtang village, which is home to around 400 people — mostly subsistence farmers or guest house workers.

In Bamboo village, at the start of the trail, Ascolani had stopped for a coffee at an outdoor teahouse when the ground began to shake, sending huge rocks hurtling down the cliffs on both sides of the gorge.

“We were running back and forth… the rocks just kept falling and it seemed like there was nowhere to go,” said the 34-year-old former English teacher.

“There were these huge rocks, the size of mini-vans, smashing buildings and cutting the trees in half.”

Ascolani, along with around 60 other tourists and 20 Nepalis, were immediately cut off in an area near Tibet accessible only on foot or by helicopter.

They were trapped in a gorge — unable to walk out because of constant rockfalls from the vertiginous slopes — and watched three helicopters come and go before finally being rescued.

He described how they sheltered under boulders and rigged tarpaulins between trees to sleep under. They boiled up muddy water from the river, filtering it using plastic bottles and gauze, and started their own fires.

They also built an outdoor privy using tarpaulin and a plastic chair with a hole in it — all skills Ascolani says he learnt through from “Survivor”.

“I have hiked before and I had watched lots of ‘Survivor’, so I knew things like how to start a fire, how to find food, shelter,” he said.

One Israeli hiker had a satellite messaging device, which meant the trekkers could contact loved ones, and they even prepared a birthday cake for one French trekker, stacking pancakes iced with chocolate spread.

A Dutch medical student tended to two Nepalis injured by falling rocks and the group built a rudimentary helipad, drawing a circle with sand and rocks and using leaves to make the letter “H” to attract attention.

On the third day after the quake a helicopter landed, but hopes of rescue were dashed when the pilots said they were only there to evacuate Japanese nationals.

A few hours later two more choppers came, this time with an order to evacuate only Israelis — although they did agree to take the two wounded Nepalis after the hikers protested.

After another 36 hours had passed with no sign of helicopters the mood in the village grew increasingly sombre, until Ascolani finally spotted a US chopper, which made multiple trips and flew them all to safety.

According to Nepal’s tourism department, more than 550 trekkers had registered to hike in Langtang from mid-April onwards. Many foreigners and Nepalis are unaccounted for, with anxious families running campaigns for updates on Facebook and Twitter.

Uddhav Bhattarai, chief district officer of Rasuwa where Langtang is located, told AFP it was impossible to say how many tourists had been killed or remained missing in the area.

– ‘Everything was wiped out’ –

“No more guest houses are there, everything was wiped (out) by the avalanche,” he said.

“Neighbouring guesthouses for trekkers are there, some, but not in Langtang (village). No more in Langtang.”

BBC footage from Langtang broadcast Tuesday showed scenes of utter devastation, with houses razed and bodies laid out on tarpaulins on the desolate terrain, ringed by snow-capped mountains and dotted with Tibetan Buddhist stupas and prayer flags.

Ascolani said he’s “happy and relieved about heading home soon” and has set up a website to raise funds for the relief effort in Nepal.

“For foreigners like us the experience of being stranded in the mountains, it’s a shock, but for the people who live here, it’s their life, they don’t have the option of flying off to another country,” he said.

“So many people helped us survive, especially all the Nepalese guides who were amazing… I feel like I now need to help those who need it more.”