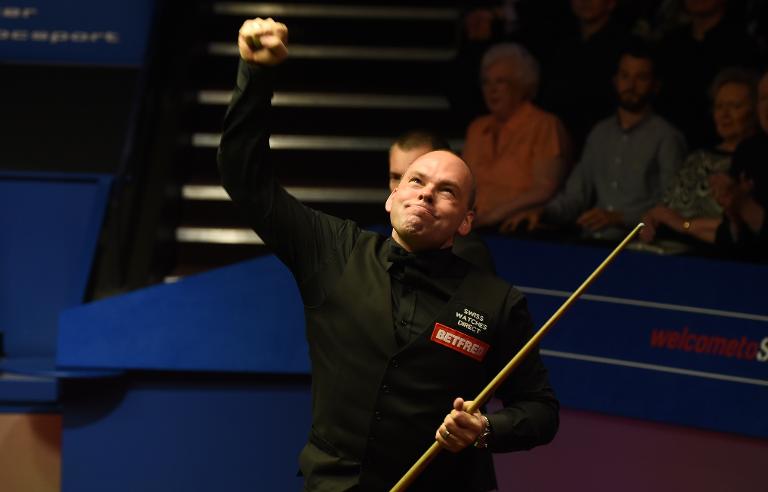 This all-English clash was a see-saw affair, with Bingham resuming Monday 9-8 behind, having been 3-0 and 8-4 down at various stages of Sunday’s opening day in this best of 35-frame contest.

But the first-time finalist won Monday’s opening session 6-2 to establish a 14-11 lead.

The 38-year-old Bingham, who earlier in the tournament knocked out five-times world champion Ronnie O’Sullivan, then won a marathon 64-minute frame to edge closer to the title before a break of 65 took him to within touching distance at 17-15 in front.

Bingham, from Basildon, east of London, then completed his victory in fine style with a break of 88 to become the oldest player to lift the world championship trophy since Welsh great Ray Reardon won the 1978 final aged 45.

“Twenty years as professional, blood sweat and tears on the road. Qualifying in places like Prestatyn and Malvern… It is unbelievable.”

Meanwhile, Murphy took his defeat in sporting fashion, saying: “I gave it my best and came up against an inspired Stuart Bingham.

“Sometimes your name is on the trophy. As a snooker geek like Stuart, there is not a player alive who deserves it more than him.”

At 15-12 in front, Bingham was in charge but Murphy, appearing in this third Crucible final and looking to equal the achievement of snooker great Alex Higgins in winning a second world title a decade after his first, was far from finished.

Bingham’s over-cut black gave Murphy a chance and he responded with a break of 75 before making 64 in the next.

Murphy needed three chance to win a scrappy 30th frame as he levelled the match but then gave away 38 points in fouls in the next after Bingham laid a couple of excellent snookers.

So long did the frame last the players took a toilet break after an hour, rather than waiting for it to finish as is normally the case.

When they returned Bingham potted the pink to go 16-15 up with tennis great Martina Navratilova, his newest fan, tweeting: “This frame was the equivalent of a 18:16 set or something like that… wow”.

By contrast, Bingham sped through the 32nd frame and, after Murphy missed a long red, took his chance to be crowned champion in what turned out to be the final frame of the match.

It had seemed in the early stages as if Murphy’s greater experience might prove decisive.

But Bingham, a 50/1 outsider with bookmakers before this tournament started, demonstrated admirable resolve.

Bingham, who 15 years ago caused a major upset by knocking out defending champion Stephen Hendry but for five successive years, starting in 2003, didn’t even qualify for the World Championship.

It wasn’t until he was 35 that Bingham won the first ranking title of his career, the 2011 Australian Goldfields Open, and he had to wait a further three years for his second, the Shanghai Masters.

However, Monday’s first session saw him win four frames in a row to go 12-9 up, with Bingham on course for a maximum 147, after sinking 14 reds and blacks, in a break of 112 before running out of position.