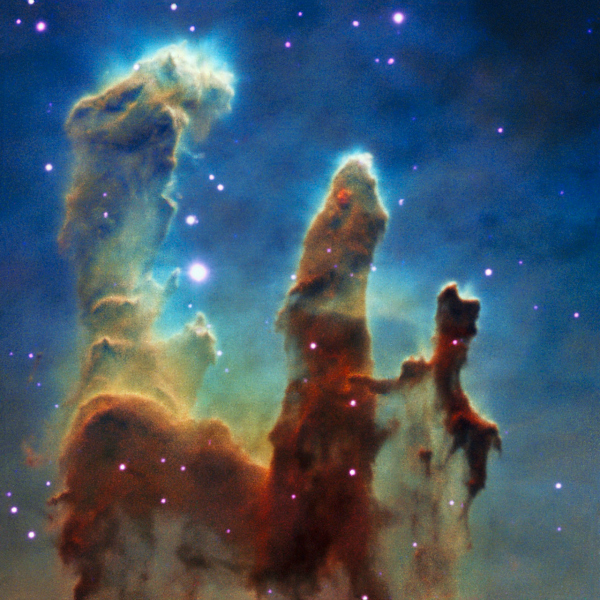 Washington: Astronomers have produced the first complete three-dimensional view of the famous Pillars of Creation in the Eagle Nebula, Messier 16.

The new observations demonstrate how the different dusty pillars of this iconic object are distributed in space and reveal many new details including a previously unseen jet from a young star. Intense radiation and stellar winds from the cluster’s brilliant stars have sculpted the dusty Pillars of Creation over time and should fully evaporate them in about three million years.

The original NASA/ESA Hubble Space Telescope image of the famous Pillars of Creation was taken two decades ago and immediately became one of its most famous and evocative pictures. Since then, these billowing clouds, which extend over a few light-years [1], have awed scientists and the public alike.

The Pillars of Creation are a classic example of the column-like shapes that develop in the giant clouds of gas and dust that are the birthplaces of new stars. The columns arise when immense, freshly formed blue-white O and B stars give off intense ultraviolet radiation and stellar winds that blow away less dense materials from their vicinity.

ESO’s MUSE instrument on the Very Large Telescope has shown that the tip of the left pillar is facing us, atop a pillar that is actually situated behind NGC 6611, unlike the other pillars and this tip is bearing the brunt of the radiation from NGC 6611’s stars, and as a result looks brighter to our eyes than the bottom left, middle and right pillars, whose tips are all pointed away from our view.

By measuring the Pillars of Creation’s rate of evaporation, MUSE has given astronomers a time frame for when the pillars will be no more. They shed about 70 times the mass of the Sun every million years or so. Based on the their present mass of about 200 times that of the Sun, theÂ Pillars of CreationÂ have an expected lifetime of perhaps three million more years-an eyeblink in cosmic time. It seems that an equally apt name for these iconic cosmic columns might be the Pillars of Destruction.Â