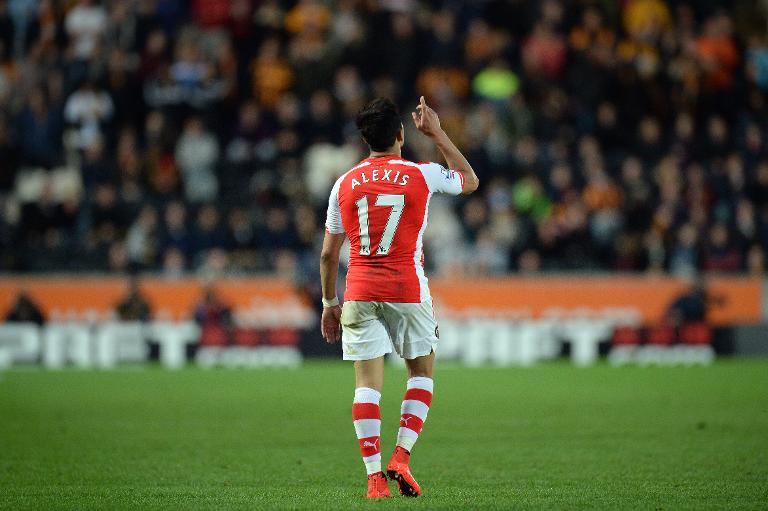 Alexis Sanchez scored twice as Arsenal all but secured a top-four finish in the Premier League for the 18th consecutive season with a 3-1 victory at struggling Hull on Monday.

Arsene Wenger’s side swept into a three-goal half-time lead thanks to Sanchez’s double and a strike from Aaron Ramsey before Stephen Quinn pulled one back for Hull after the break.

The victory put third-placed Arsenal nine points clear of fifth-placed Liverpool, who have only three matches remaining and a vastly inferior goal difference to the Gunners, and effectively guaranteed their qualification for the Champions League.

In stark contrast, Hull are in severe danger of relegation after dropping below Leicester to 17th — one point and one place above third bottom Sunderland, who have a game in hand.

Arsenal’s win came too late to alter the destiny of the title, won by Chelsea last weekend, but left them well-placed for their FA Cup defence against Aston Villa at Wembley later this month.

Santi Cazorla, who had a fine match for Arsenal on Monday, told Sky Sports: “Of course we want to win the title next year (season), but second place this season is for now the most important thing.”

A run of eight successive wins ended with a goalless draw against Chelsea, but Arsenal manager Wenger kept faith with the same team from that fixture and saw his side enjoy a comfortable victory.

This fixture came six days after Hull put in an impressive display to beat Liverpool at the KC Stadium, their second successive win after a victory over Crystal Palace.

That six-point haul served to give the Tigers a vital boost in the fight for survival, but wins on Saturday for Leicester, Sunderland and Aston Villa did Hull few favours.

Arsenal were dominant from the start and Hull contributed to their own downfall by surrendering possession too easily.

Sanchez scored in the league and FA Cup meetings with Hull this season and the Chile winger was the first Arsenal player to test Steve Harper in the hosts’ net.

Sanchez swapped passes with Mesut Ozil and his shot from 20 yards was spilled by Harper before Michael Dawson slid in to clear the ball with Olivier Giroud waiting to capitalise.

Sanchez was given another shooting chance when he went down after a foul by Jake Livermore and the Arsenal star picked himself up to curl his free kick beyond Harper, with the help of a huge deflection off Michael Dawson in the defensive wall.

Five minutes later, Hull were further behind thanks to another deflected strike.

Cazorla’s raking pass from the left-back area was superbly controlled by Ramsey before the Wales midfielder’s shot hit Robbie Brady and spun past Harper and into the corner.

It got worse for the hosts in first half stoppage-time when Tom Huddlestone was caught in possession and Ramsey’s through ball sent Sanchez clear.

The forward touched the ball wide of Harper before stroking the ball into the empty net.

Hull were in danger of being blown away but, to their credit, they improved dramatically in the second half.

Bruce sent on David Meyler in place of Livermore and the Republic of Ireland international was involved as Hull pulled a goal back in the 56th minute.

Meyler forced the ball out wide to Ahmed Elmohamady and the Egyptian’s cross was headed down and into the net by Quinn for his first league goal since March 2013.

The travelling Arsenal fans warmly greeted the introduction of midfielder Jack Wilshere as the England international came off the bench for a first appearance since November following his recovery from a knee injury.

Arsenal twice went close to restoring their three-goal cushion in the closing stages but Harper saved with a foot to keep out Cazorla’s deflected drive before James Chester, apparently using an arm, blocked Wilshere’s first-time effort on the line.