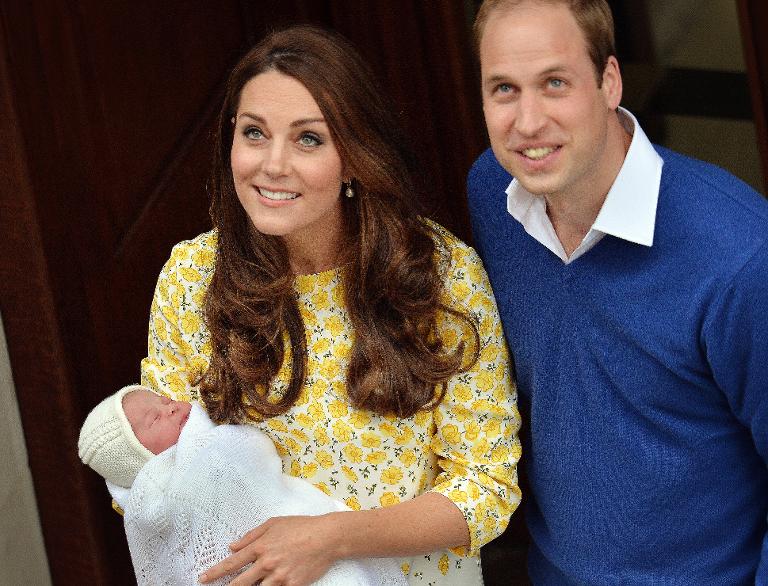 Royal watchers around the world waited to discover the name of the two-day-old British princess born to Prince William and his wife Kate, which could be announced on Monday.

The couple left hospital with their newborn daughter on Sunday — and when their toddler son George was born in 2013 his name was announced the day after they left hospital.

In the meantime, speculation over what name might be given to the princess heated up.

Alice and Charlotte are vying to be the bookmakers’ favourite, followed by Victoria, Olivia and Elizabeth.

But some commentators urged the Duke and Duchess of Cambridge to name the princess after William’s mother Diana, who died in a 1997 car crash aged 36, prompting an outpouring of public grief.

“As the nation waits, why the Princess must be called Diana” read a headline on the front page of The Telegraph.

“William’s late mother was there in spirit, outside the hospital on Saturday, her oval sapphire and diamond engagement ring on the hand Kate used to adjust the sleeping baby’s shawl,” journalist Allison Pearson wrote in the article.

“William gave his fiancee that ring so that his mother, as he said, could be part of their wedding, and I’m sure her name will be passed on to his daughter in the same spirit of commemoration.”

The Star put a photo of Diana on its front page, writing “Fans want the new Princess’s name to include a tribute to Wills’ mother.”

Jessica Bridge of bookmakers Ladbrokes said that the betting markets had been “total mayhem” over the last 24 hours.

“Bookies all over the UK are hoping and praying for any name other than Alice, Charlotte, Victoria, Elizabeth, Olivia, Alexandra or Diana,” Bridge said.

Close family may already have been told the name, and on Sunday both sets of grandparents came to visit William and Kate, Prince George and the new baby.

William’s father Prince Charles, the Prince of Wales, and his wife Camilla, the Duchess of Cornwall, went to see them at Kensington Palace, as did Kate’s parents Michael and Carole Middleton, and her sister Pippa.

Uncle Harry, away serving with the Australian army, will have to wait a while longer to see his niece.

After completing his secondment with Australian army units in Perth and Sydney, he will undertake an official tour of New Zealand from May 9 to 16.

Like people around the world, Harry sent a message of good wishes to the family and the one-day-old princess.

“She is absolutely beautiful,” Harry said. “I can’t wait to meet her.”

A palace spokesman said William and Kate were “hugely grateful” for the messages of congratulations they have received “from people all over the world”.

“It means a great deal to them that so many people have celebrated the arrival of their new daughter.”

Gun salutes will be fired across London on Monday to mark the birth, and tourism chiefs said the baby was expected to boost visitor numbers to London.

To mark the arrival, many of the capital’s hotels and restaurants celebrated with regal-themed afternoon teas and London landmarks including Tower Bridge and the Trafalgar Square fountains were lit up in pink late Saturday.

William and Kate were expected to spend the next few days at Kensington Palace before travelling to Anmer Hall, their secluded 10-bedroom mansion on Queen Elizabeth II’s Sandringham estate in Norfolk, eastern England.

The monarch was seen attending church there on Sunday, so it is likely she will meet her fifth great-grandchild for the first time at the private country residence.

The new baby is fourth in line to the thrones of Britain and 15 other states including Canada, Australia, New Zealand and Jamaica.

The tiny princess is behind Queen Elizabeth’s eldest son Charles, 66, his eldest son William and William’s eldest child George in the line of succession.

However, the baby is the first major royal who cannot be overtaken by any future younger brothers following changes to the monarchy’s rules to remove gender bias.

Kate gave birth within three hours of being admitted to St Mary’s Hospital in central London on Saturday.

William was present for the birth at 8:34am (0734 GMT) and the princess weighed in at eight pounds and three ounces (3.7 kilos).

William then brought a rather stunned-looking George to the clinic to meet his little sister.

It was the first time since his own birth at the hospital in July 2013 that George had been seen at a public event in Britain.

A beaming William and Kate then left hospital carrying their newborn, cheered by hundreds of well-wishers who had gathered outside the hospital’s private Lindo Wing along with massed ranks of photographers.

The sleeping baby was wrapped in a woollen shawl as a relaxed-looking Kate cradled her in her arms.