Home Science & Tech Who created the piano after all? 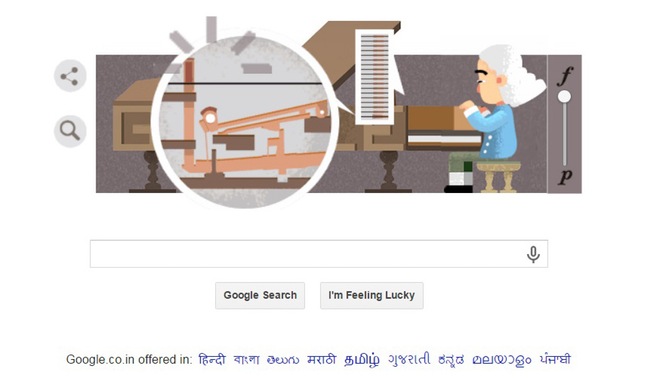 New Delhi: Priests in US agree to one thing without fail, Google has answers that even God fails to provide.

We all are familiar with what a piano is and never fail to admire the sound it produces, but do you know who created the musical instrument? Today’s Google doodle has the answer.

An Italian musical instrument maker, Bartolomeo Cristofori, has been credited with inventing the pianoforte or the piano. One of his biggest innovations was creating a hammer mechanism that struck the strings on a keyboard to create sound.

The use of a hammer made it possible to softer or louder sounds depending upon the pressure on laid on the keys while playing. That’s exactly how Cristofori named the instrument: piano means soft in Italian, while forte means loud.

Created by doodler Leon Hong, today’s animated Google homepage across the world celebrates the 360th birthday of the lesser known personality who gave the world a pianoforte and stream their compositions with melody.

The biggest challenge of creating this doodle as noted in Google’s blog was to provide the ability to change the volume as the interactive musical doodle. The melody being played is from Johann Sebastian Bach’s Jesu, Joy of Man’s Desiring, which is from the same time period as Cristofori’s life.

Cristoforo’s original pianos are on display at the Metropolitan Museum of Art on Google Cultural Institute or at the museum in New York City, at the Museo Strumenti Musicali in Rome, and at the Musikinstrumenten-Museum of Leipzig University in Germany.