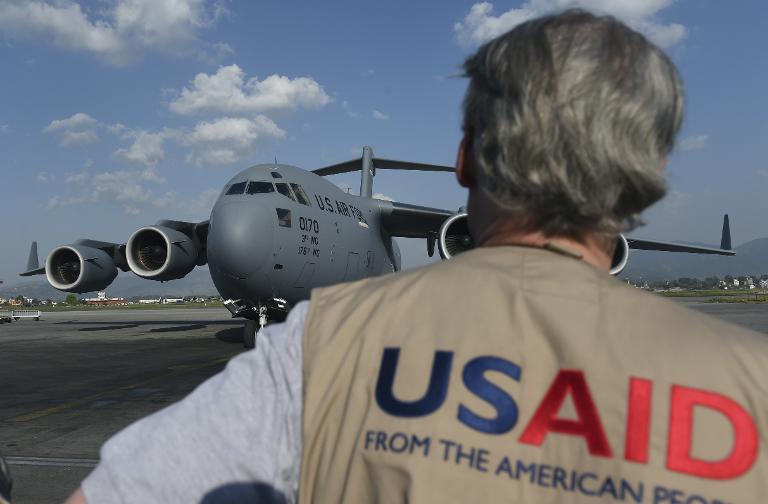 US military helicopters began reconnaissance trips Monday to assess remote areas of Nepal devastated by an earthquake that killed more than 7,300 people, an official said.

Nine days after a 7.8-magnitude quake brought death and destruction to the Himalayan nation, the helicopters surveyed mountain villages.

“Only the ‘Hueys’ (helicopters) have gone out so far for reconnaissance flights to try to identify areas in need of relief. No Ospreys have been out,” a US embassy official told AFP on Monday.

The Ospreys and a US Air Force C-17 aircraft touched down in the capital Kathmandu on Sunday.

“They’ll have multiple aims. They’ll be delivering relief supplies, they might do some rescues, they’ll also do assessments,” US ambassador Peter W. Bodde told reporters.

A Nepalese official said the US aircraft would also airlift victims out of remote areas which suffered some of the worst devastation following the April 25 quake.

“They are also assisting any casualties in mostly the eastern side of Nepal… places worst hit like Sindhupalchowk, Gorkha area,” Surya Prasad Silwal, the home ministry secretary, told AFP.

He said later that some foreign rescue teams had been asked to leave “now that there is no chance of any survivors”.

“As per general practice, foreign teams do not handle or are not willing to handle dead bodies… They will be given a grace period to wind up and then they will leave automatically,” he told AFP.

While the official death toll for Nepal rose to 7,365 on Monday, with some 14,000 injured, authorities warned the final tally would be much higher. More than 100 people were also killed in neighbouring India and China.

Nepal police spokesman Kamal Singh Bam said 57 foreigners were known to have died while 112 were still missing. Many were in the popular Langtang trekking region north of Kathmandu when the quake struck.

“A few foreigner bodies were taken to Kathmandu from Langtang yesterday. According to villagers there, they say many other foreigners may have been buried and killed in the landslide,” the spokesman said.

– ‘Everything was wiped out’ –

Uddhav Bhattarai, chief officer of Rasuwa district where Lantang is situated, told AFP the bodies of seven foreigners had been found but only two had been identified. He could not say exactly how many were missing.

“The whole of Langtang village was cleared, nothing remains there. No more guest houses, everything was wiped out by the avalanche,” he said.

Finance Minister Ram Sharan Mahat had said the death toll was likely to jump once relief teams reached mountain villages flattened in the worst quake to hit the nation in more than 80 years.

Around two dozen countries have been helping in the relief effort. And while the international teams have been welcomed by the Nepalese authorities, they have also created a logjam at the only international airport on the outskirts of Kathmandu.

But some villagers in Sindhupalchowk, hard hit by the quake and resulting landslides, said they were still waiting for aid to arrive.

“My children are crying for food and shelter but I am unable to manage,” Bichari Biswokarma, 52, told AFP in Ghorthali village, more than three hours by road from Kathmandu.

“I heard of some relief funds, packages but no one has reached our village to provide relief. I wish me and my family had died then and there.”

Non-governmental organisation Handicap International reported that around 12 percent — roughly 3,000 — of the patients treated at four hospitals in the Kathmandu valley had spinal injuries, according to the UN.

The report added that “the number of amputations has increased and the frequency seems to be accelerating”.

Late Sunday climbing firms called off their Everest spring expeditions after a quake-triggered avalanche killed 18 on the world’s highest peak.