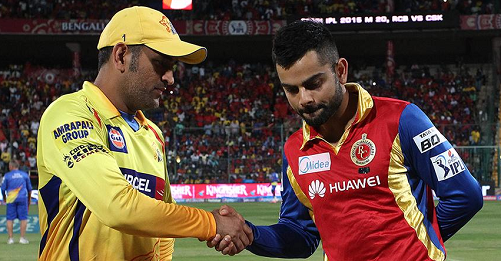 Chennai: Chennai Super Kings would seek to get back to winning ways and consolidate their position at the top while Royal Challengers Bangalore would hope to build on the momentum when they lock horns in an Indian Premier League (IPL) cricket match in Chennai on Monday.

Still leading the table with six wins from nine matches, the Super Kings are coming off a 22-run defeat at the hands of Sunrisers Hyderabad, and they would be happy to be back at their home ground.

On the other hand, Royal Challengers Bangalore, placed third in the standings with five victories from 10 games, recorded a convincing win over defending champions Kolkata Knight Riders in a rain-curtailed match at the Chinnaswamy Stadium.

The Virat Kohli-led side would be keen to continue in same vein and another win, against a strong CSK side, would naturally boost their confidence.Â With the likes of the big-hitting Chris Gayle, A B de Villiers and Kohli himself in the team, RCB can fancy their chances at the M A Chidambaram Stadium.

Young Mandeep Singh too fired with a cracking knock in the win over Knight Riders and he would want to impress one more time. De Villiers missed out on the last game and a big one is due from his willow.

On the bowling front, Mitchell Starc’s presence has bolstered RCB’s bowling. Varun Aaron has been wayward often and Yuzvendra Chahal will take care of the spin department.Â Notwithstanding the presence of a few great players, it will take some effort from RCB to get the better of the Super Kings at their own den.

CSK have just lost a game and they would be doubly determined to get back to winning ways.Â Led by the experienced Mahendra Singh Dhoni, two-time winners CSK boast of some high quality batsmen in swashbuckling opener Brendon McCullum, Dwayne Smith, Suresh Raina and Dwayne Bravo besides the skipper himself.

Almost all of them got starts in the previous match but could not capitalise, and they will have to correct it tomorrow.Â Barring Bravo, who finished with creditable figures of 3/25 in a high-scoring game, and Ashish Nehra to an extent, the CSK bowlers were smashed around by David Warner and co yesterday, and another tough task awaits them.