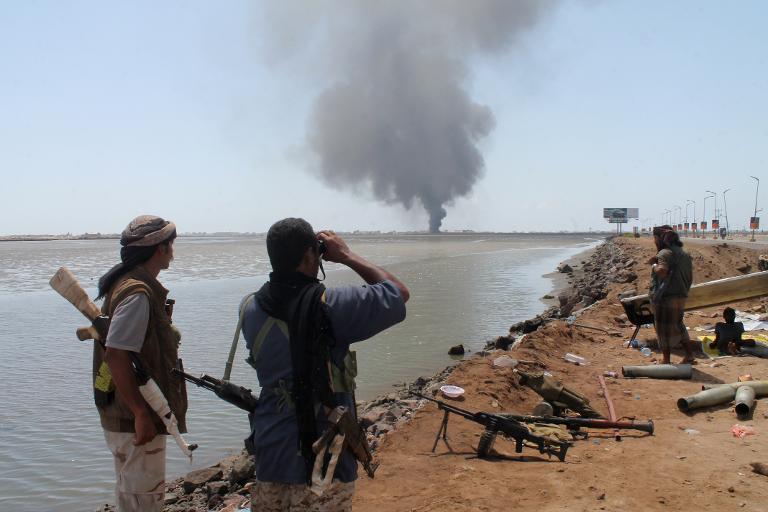 The Saudi-led coalition battling rebels in Yemen sent a “limited” force to the city of Aden, Yemeni sources said, in what would be its first ground deployment inside the country.

A spokesman for the coalition denied that a major ground force has landed, refusing to comment on “ongoing operations”.

But Yemeni government and militia forces said several dozen troops had landed in the main southern city, with some sources saying they were to assist in fighting for its international airport.

An AFP journalist saw several men in the vicinity of the airport dressed in military-style clothing, wearing helmets and carrying sophisticated weaponry.

“A limited coalition force entered Aden and another force is on its way” to the port city, a Yemeni government official in Aden told AFP, requesting anonymity.

The coalition launched air strikes against the Iran-backed Shiite Huthi rebels and their allies on March 26 after they seized control of large parts of the country and advanced on Aden, where President Abedrabbo Mansour Hadi had taken refuge.

Hadi fled to Saudi Arabia and the Huthis — who have joined forces with army units loyal to ex-president Ali Abdullah Saleh — have refused to concede territory or down arms despite international pressure.

A leading member of the so-called “popular committees” militia supporting Hadi told AFP the newly deployed troops “will start helping us in fighting the Huthis and Saleh’s forces”.

The troops will mainly back pro-Hadi fighters around the rebel-held airport, which has changed hands several times and was again the focus of heavy fighting on Saturday night, he said.

Other militia commanders confirmed that a few dozen coalition soldiers, mostly Saudis and Emiratis of Yemeni origin, were on the ground in Aden.

One militia source said some 30 soldiers from coalition countries had deployed to “supervise” operations to retake the airport.

“I can assure you that no (coalition) forces disembarked on the ground in Aden today,” he told Saudi news agency Al-Ekhbariya.

But in comments to Doha-based Al-Jazeera television, Assiri said that “all options are open”.

“The coalition leadership will not spare any effort to support the resistance and achieve positive results on the ground,” Assiri said.

On Sunday, coalition warplanes pounded rebel positions in and around the airport as clashes raged on, said a pro-Hadi military official.

Medics in Aden said that at least 18 people, most of them civilians, were killed since Saturday and 65 others wounded.

Local officials said most of the casualties resulted from rebel mortar shelling and gunfire across residential areas.

The coalition declared an end to its Operation Decisive Storm air strikes on April 21, saying the campaign would enter a new phase dubbed Renewal of Hope focused on political efforts, aid deliveries and “fighting terrorism”.

But air strikes have continued and the coalition has faced increasing criticism for its campaign.

At least 1,200 people have been killed in Yemen since late March and thousands more have been wounded.

Human Rights Watch on Sunday accused the coalition of using US-supplied cluster bombs in its operation, warning of the long-term danger to civilians.

The widely banned bombs contain dozens of submunitions, which sometimes do not explode, becoming de facto landmines that can kill or maim long after being dropped.

HRW said it had gathered photographs, video and other evidence indicating that cluster munitions had been used in air strikes against the Huthi rebel stronghold of Saada province in Yemen’s northern mountains in recent weeks.

Cluster munitions are prohibited by a 2008 treaty adopted by 116 countries, but not by Saudi Arabia and its coalition partners or the United States.

Saudi Arabia denied it was using cluster munitions earlier in the campaign.

The United States defended its transfers of cluster munitions following the HRW claim Sunday, saying they were subject to stringent requirements.

Washington permits the use and export of the weapon because it has an unexploded ordnance rate of less than one percent.

“Recipients of such transfers must commit that cluster munitions will only be used against clearly defined military targets and will not be used where civilians are known to be present or in areas normally inhabited by civilians,” a US Defense Department official said.

Countries that have joined the Saudi-led coalition include the Gulf Arab monarchies, Sudan, Morocco and Egypt, with Cairo announcing Sunday it would extend its participation in the coalition for another three months, or until the end of the combat mission.