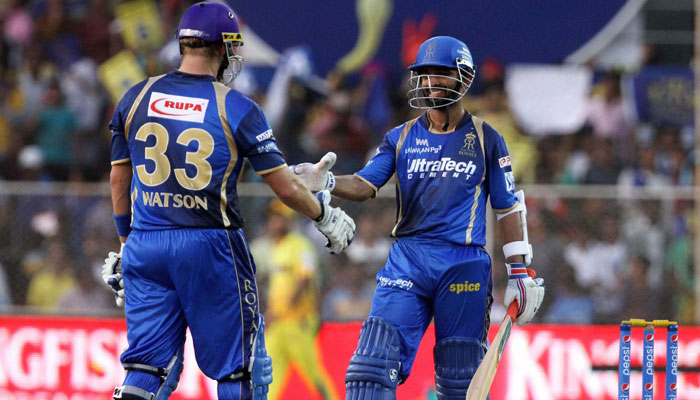 Rahane shared 113 runs with Nair, who made 61 off 38 balls, from just 11.3 overs for the second wicket as Rajasthan scored an imposing 189 for 2 after being put into bat at their second home venue at the Braboune Stadium.
Chasing the stiff target of 190, Delhi could only score 175 for 7 in 20 overs to lose the one-sided contest, which turns out to be IPL’s 500th match.

Rahane, who today became the highest run getter of this season with 430 in his name from 10 matches, hit nine fours and three sixes in his knock while Nair smashed six boundaries and two sixes as Rajasthan scored 75 runs from the last five overs.

The duo also capitalised on some sloppy fielding dished out by Delhi players as Rahane was dropped twice — on 34 and 64 — and Nair once — on 35 . Delhi also conceded a few runs from sloppy ground fielding.

After today’s win, Rajasthan, who have not won a single match in their last five encounters (three losses and no results), have 14 points from 11 matches to jump to the top of the league table, two more points than Chennai Super Kings who have played only nine games so far.

Delhi, who today suffered their fifth loss in nine matches, remained on sixth spot with eight points from nine matches.

The visiting side struggled throughout their run chase as they lost their first wicket at a total of 20 in the third over. They lost wickets at regular intervals and did not have a substantial partnership.

Captain Jean-Paul Duminy top-scored with a 39-ball 56 but none of his batting colleagues, including out of form Yuvraj Singh (22), gave him little support as Rajasthan won the match quite comfortably in the end.

Delhi began their run chase poorly by losing openers Mayank Agarwal (11) and Shreyas Iyer (9) within five overs with only 32 on board. Both batsmen played against Stuart Binny and Shane Watson respectively.

Yuvraj and captain Duminy had to do the repair work and did it for some time to take the score to 65 when the former, the costliest buy in the auction at Rs 16 crore, continued his horrendous run in the season and departed for 22 from 18 balls.

Yuvraj gave glimpses of what he could do in peak form as he hit three fours off Binny in one over before left-arm pacer Faulkner cramped him first and then baited him with a short ball that he hooked to be caught at deep square leg.

Yuvraj’s dismissal left Duminy, who was struggling against the extra bounce of Watson and Faulkner, and Sri Lankan all-rounder Angelo Mathews a steep hill to climb which did not happen as the latter departed after adding 41 runs with his captain.

Duminy ploughed a lonely furrow, hitting three sixes and as many fours, before he was caught at square leg off Faulker leaving the remaining Delhi batsmen to make 45 runs off the last 12 balls which they could not achieve.

Saurabh Tiwary remained unbeaten with a quick-fire 28 off 14 balls, inclusive of two sixes and a four.

Earlier, Rahane and Nair hit sparkling half centuries and got involved in a century stand to power Rajasthan Royals to an imposing 189 for 2.

Rahane warmed up slowly before tearing into Delhi bowling to post his fourth half century of the season as well as reach to 430 runs in his 10th game while making an unbeaten 91 — his highest this season — from 54 balls.

Nair, promoted to number three at the fall of captain Shane Watson (21), gave his senior partner Rahane splendid support by making a quick-fire 61 off 38 balls, laced with two sixes and six fours, before being dismissed in the 19th over.

The duo’s second wicket stand worth 113 off 69 balls helped Rajasthan up the ante further after Rahane and captain Watson had put on 52 for the first wicket in 6.5 overs.

Delhi started off well but then their pace-oriented bowling became wayward and the fielding rugged as three catches, two off Rahane and one off Nair, were put down and they also conceded runs through misfielding.

In the beginning, Delhi kept Rahane and captain Watson on a leash on the Brabourne Stadium track that offered good bounce till the end of the fourth over by conceding 23 runs.

However, the fifth over bowled by Zaheer Khan yielded 13 runs when Rahane struck him for a four to the cover region and then Watson slashed and clipped the bowler for two fours when he erred in line.

When Rahane flicked Nathan Coulter-Nile bowled on his pads, Rahane gleefully dispatched it for another four that helped Royals end the six-over power play with 43 on board without losing a wicket.

Zaheer was replaced after a three-over spell that yielded 21 runs by Sri Lankan Angelo Mathews who gave width to Watson to be hit for two fours before taking his revenge by having the Australian caught behind with a rising ball.

But Watson had the satisfaction of giving Rajasthan a good start of 52 with Rahane who was dropped by IPL debutant Gurinder Sandhu when on 34 off Mathews.

Rahane then got involved in the century stand with one-down Nair, promoted ahead of last game’s batting hero Sanju Samson, and the Karnataka Ranji batsman utilized the faith shown by playing some clever shots and giving good support to his senior partner.

Nair was put down on 35 off Coulter-Nile at third man by Saurabh Tiwary. In the same over, Rahane pulled a short ball from the tall Australian pacer over square leg for the first six of the innings to reach his fourth half century in 10 games before completing the 400th run of the season with a six and a four off leggie Amit Mishra.

Nair then took over the attacking reins and smashed Sandhu for a six and two fours to reach his 50 in 33 balls after Zaheer and Mishra got into a tangle and grass Rahane earlier in the over that yielded 19 runs.

Finally, Nair fell to Coulter Nile who finished with one for 38 while the most economical spell came from Mathews (1 for 27). But Rahane and promoted James Faulkner hit a few more boundaries towards the end to remain unconquered.