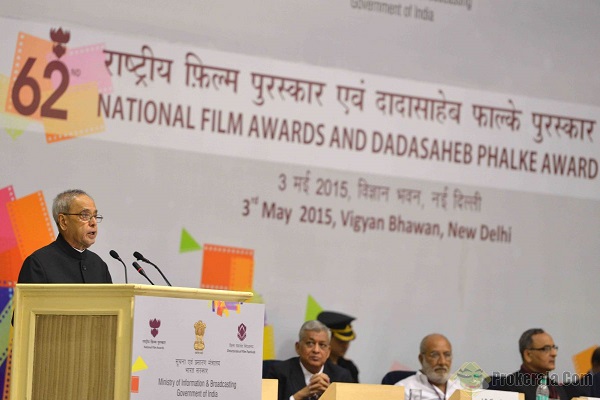 “With the world’s youngest demography and the growing smartphone market, our country is likely to soon embrace a completely digital ecosystem which would help us connect with even larger numbers transcending geographical and cultural barriers,” he said.Â

“Digitization and the advent of modern technologies do not mean that we lose touch with the grassroots. Our content has to be our strength as it is entrenched deeply in our vibrant cultural milieu,” Mukherjee said after presenting the award for the best film to Marathi film ‘Court’, best actor to Vijaya Kumar B for Kannada film ‘Nanu Avanalla Avalu’ and best actress to Kangana Ranaut for ‘Queen’.

Young winners, including winner of the best film award Chaitanya Tamhane and 10-year-old Uthara Unnikrishnan who was judged best playback singer, caught the President’s attention, who lauded them for their talent.Â

Speaking on the occasion, I&B minister Arun Jaitley remarked how films like ‘Mary Kom’ (which won the award for the best popular film providing wholesome entertainment) and ‘Queen’ (which won best Hindi film) showcased the triumph of the spirit of liberation and empowerment of women.Â

Others present at the function were junior I&B minister Rajyavardhan Rathore and I&B secretary Bimal Julka.Â

The highlight of the function was a live musical performance by Sukhwinder Singh who sang ‘Bismil’ from the film ‘Haider’ and a song by Uthara Unnikrishnan. A total of 21 awards in the non-feature film category and 45 in the feature film category were given by the President.