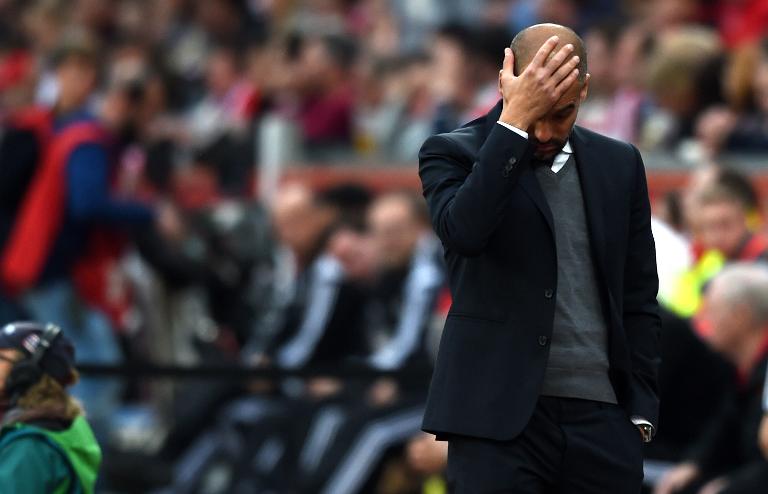 Pep Guardiola is struggling to deal with the pressure of winning the Champions League with Bayern Munich ahead of Wednesday’s semi-final at Barcelona, according to ex-Germany captain Stefan Effenberg.

Munich have won back-to-back German league titles under Guardiola, but the 44-year-old recently insisted that only the treble of Champions League, Bundesliga and German Cup titles is enough to satisfy Bayern’s appetite.

The Spaniard will make his first return to the Camp Nou for Wednesday’s first leg since winning 14 titles in four years with Barcelona before resigning in 2012.

Ex-Bayern star Effenberg, 46, says Guardiola’s occasionally eccentric behaviour on the sidelines shows he is struggling with the pressure to bring a sixth European title to Bayern.

Guardiola has raised a few eyebrows during his second season at Bayern by hugging the fourth official following heated exchanges in Bayern’s league win over Schalke last February and again in their German Cup semi-final defeat to Dortmund last week.

The Spaniard spends most of each match passionately encouraging his players from the sidelines, much to Effenberg’s disapproval.

“I am not a fan of Guardiola’s extreme coaching during games,” he told German magazine Kicker.

“You have to trust your players, you have already prepared them for a match for days.

“On top of all that, Guardiola is also getting involved in discussions with the linesmen and fourth officials.

“That only further illustrates the immense pressure he is under.”

Under Guardiola, Bayern are used to playing with around 75 percent possession and Effenberg says it was their undoing in last season’s heavy defeat to Real Madrid at the same stage of the competition.

“Bayern always have 65 to 70 per cent possession and want to be an offensive force,” said Effenberg.

“But things went wrong for them in the semi-finals against Madrid last season.

After back-to-back defeats, Effenberg says Bayern go into the semi-final clash as underdogs, especially given Barcelona’s recent 6-0 and 8-0 victories in the Spanish league.

Their star-studded strike force of Lionel Messi, Neymar and Luis Suarez has scored 108 goals between them this season.

“But sometimes football writes a different story and I will cross my fingers for Bayern,” said the ex-Munich midfielder, who is now a pundit for German television.

“This will be the biggest test of Guardiola’s playing philosophy.”