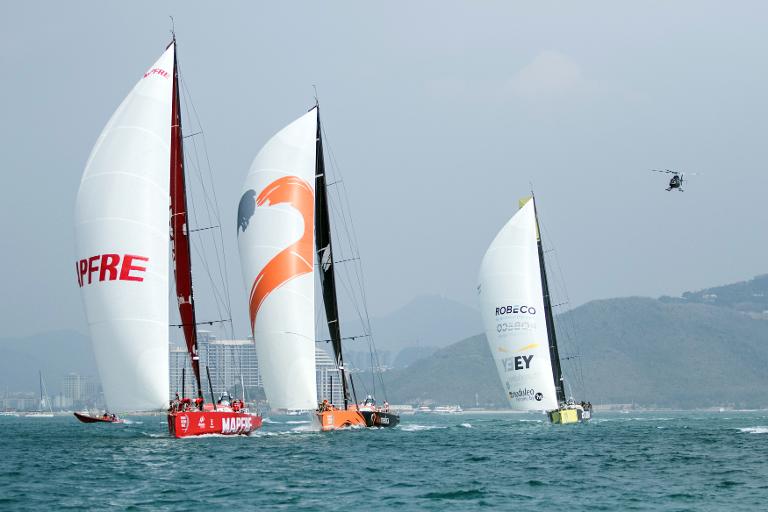 The Volvo Ocean Race fleet escaped an ominous low pressure patch in the middle of the notorious Bermuda Triangle on Monday and headed towards a showdown finish in Newport, Rhode Island.

The Bermuda Triangle separates Bermuda, Costa Rica and Miami and has for more than 50 years been regarded as a magnet for trouble for vessels travelling by sea and air although there is little scientific evidence that it is a particularly hazardous area.

The six boats had expected problems, however, as they navigated the region on Monday with very light winds forecasted to hold up the fleet in the mid-Atlantic.

However, the weather changed favourably for the crews, who barely slowed, and the estimated time of arrival for the leaders in Newport after 17 days of sailing from ItajaÃ­, Brazil, shifted a few hours forward to Thursday morning.

Team Brunel (Netherlands) led the chasing pack with Abu Dhabi hot on their heels, 3.3nm astern of them.

The three had opened up a small gap over MAPFRE (Spain), who were having their own dogfight with Team Alvimedica (U.S.), some 17nm behind Ian Walkerâ€™s crew of Abu Dhabi.

All female crew Team SCA (Sweden), to the east of those two packs, were still struggling to keep pace, some 82.9nm behind Dongfeng.

Many of the sailors have been admitting that the relentless close quarter sailing of six well-matched crews on identical Volvo Ocean 65 boats is beginning to take its toll on nerves and body alike after seven months at sea.

Charles Caudrelier, skipper of the stage leaders Dongfeng Race Team, summed up: â€œAccording to the clouds and narrow corridors of wind, we have good and bad phases. It grinds down the nerves.”

At the other end of the fleet, Sam Davies, of Team SCA, is equally feeling the pace.

“I feel like the last seven months of racing is taking its toll on my body and I am trying to play catch-up with my resting periods in order to be able to do my job properly,” she wrote.

“This racing is a crazy life.”

The boats will have 10 days in dock for maintenance before setting off for the final transatlantic crossing to Lisbon, Portugal, on May 17.

There are then two more legs taking in France (Lorient), The Netherlands (The Hague) and Sweden (Gothenburg), with the race concluding on June 27 after nine months.