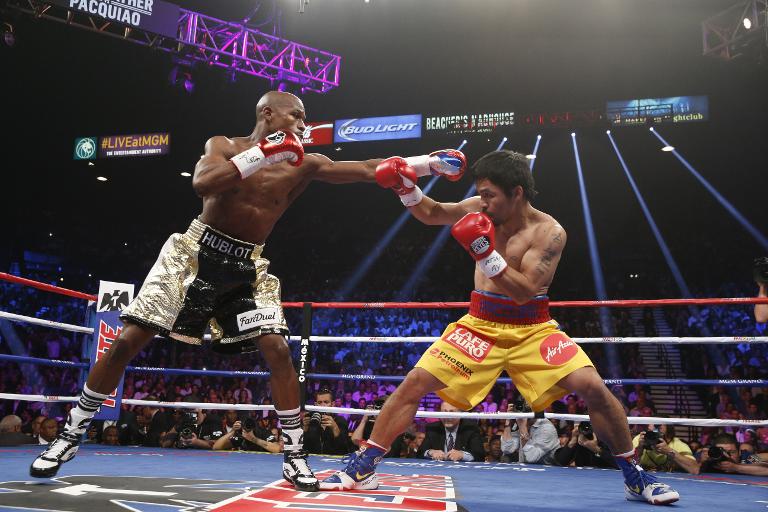 Floyd Mayweather’s emphatic win over Manny Pacquiao sealed his status as a boxing great, but triggered an outcry in the Philippines and divided opinion amongst the sports legends.

Feinting and dancing his way to a unanimous decision, Mayweather comfortably picked off Pacquiao over 12 rounds to extend his 19-year unbeaten record to 48-0.

But the lucrative bout hyped as the “Fight of the Century” failed to pack the visceral punch seen in some of boxing’s most celebrated confrontations, and Mayweather’s win was booed by sections of a 16,507 crowd at the MGM Grand in Las Vegas.

Yet the jeers could not obscure a clear win for the skilful Mayweather, with judges awarding him the decision by margins of 118-110 and 116-112.

Mayweather, who retained his World Boxing Association welterweight titles and seized Pacquiao’s World Boxing Organization crown, faced down his detractors immediately after the fight, clambering on the ring ropes and yelling: “I told you!”

“Everyone said this guy could beat Floyd, that Floyd is a chicken,” Mayweather said. “The non-believers, well Floyd turned them into believers.”

Not everyone was converted, however, with former world champion Oscar de la Hoya, who lost a split decision to Mayweather in 2007, bemoaning his “running style.”

“Sorry boxing fans,” De La Hoya wrote on Twitter. “Call me old school but I like the fans getting their money’s worth by watching an action-packed fight.”

Former world heavyweight champion Mike Tyson, who had picked Pacquiao to win, wrote on Twitter: “We waited five years for that … #underwhelmed.”

Fans in the Philippines echoed the disappointment of those in the ring, crying foul over the judges’ decision and claiming their man was robbed of victory.

Filipino politicians and public figures ranging from the head of the army to swimsuit models weighed in on the decision, lining up to cry foul in a land where Pacquiao, 36, is revered as a national hero.

Pacquiao, who said after the fight a shoulder injury had hindered his performance, insisted he had done enough to win the bout.

But other fight figures praised Mayweather’s exhibition of elusive ringcraft.

Britain’s Lennox Lewis on Twitter said: “If U can’t catch it you can’t hit it #Maypac that pretty much sums up the fight.

“Some ppl want blood & get disappointed when they don’t get it. Doesn’t take away from the fact that Floyd is a great technician.”

Frank Bruno hailed Floyd Mayweather as a supreme “craftsman” of the ring.

“In this generation you have to go very, very far before you can be a skilled craftsman, businessman, technician, professional and a king in knowing his craft,” he told BBC Radio 5 Live’s Sportsweek programme.

“As a boxer you’ve got to admire him, he’s got to go down as one of the greats.”

The debate washed over Mayweather as he retreated to count his winnings, estimated at more than $200 million for a night’s work.

“I am the American dream,” Mayweather said, reiterating his insistence that he plans to retire in September after one more win that would see him level Rocky Marciano’s legendary milestone of 49-0.

“My last fight is in September. I’ll do that and I will hang it up,” said Mayweather.

Pacquiao will receive well over $100 million in a 60-40 purse split the fighters agreed to beforehand, with revenues believed to have soared past $400 million.

The unprecedented interest in the fight saw the entrance of the boxers delayed about 45 minutes as heavy demand for the pay-per-view telecast overwhelmed broadcasters and created technical problems.

The audience at ringside read like a who’s who of Hollywood and the sports world with director Clint Eastwood, actors Robert De Niro, Jon Voight, Denzel Washington, Bradley Cooper, musician Sting and former NBA star Magic Johnson in the crowd.