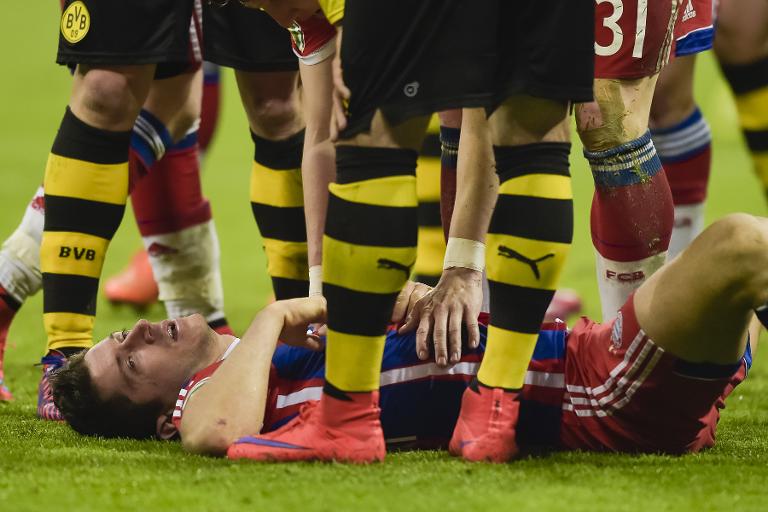 “He moved well and made a good impression, it looks like he’s fit and motivated to play,” Bayern defender Boateng told reporters in Munich after training with Lewandowski.

“He didn’t have any fear, he is very brave and he will get used to the mask, I don’t think it’ll be much of a problem.”

The 26-year-old Lewandowski, the German champions’ top-scorer with 23 goals, sat out Bayern’s 2-0 league defeat at Bayer Leverkusen on Saturday to try and get him fit for the first leg at the Camp Nou.

Bayern have said they will leave the decision to Lewandowski as to whether he plays, but the Poland international posted a picture of himself wearing the mask on Sunday with the text “Ready for the next challenge” in Polish.

Bayern coach Pep Guardiola will be making his first appearance on the opposition’s bench since winning 14 titles in four years at the Camp Nou on what promises to be an emotional night for the Spaniard.

“Pep is very focused. For the coach this is a very special game,” said Boateng.

After back-to-back defeats, Bayern have had their confidence rocked, but there is no fear of playing the Spanish giants at home.

“We are not afraid. If we want to win, we can’t allow ourselves to be afraid,” said Spain midfielder Javi Martinez.

Boateng says the Bayern defence is not concerned about trying to contain Barcelona’s star-studded attack of Lionel Messi, Neymar and Luis Suarez, who have 108-goals between them this season.

“Of course, they have an exceptional attack,” said Boateng.

“Any lack of attention will be punished straight away.

“But it depends on what we do as a team, we have to defend as a unit.

“We’ll defend together and we’ll attack together.”