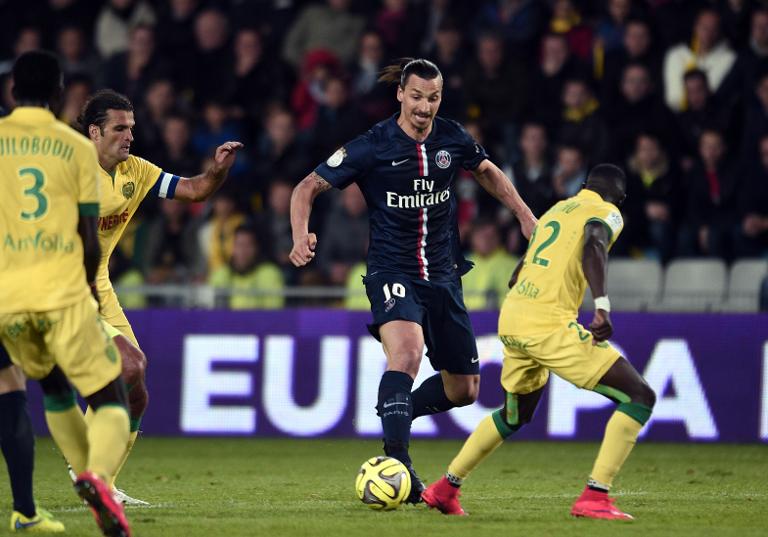 The Swede had a hand in both goals, notably playing the ball between Nantes’ captain Oswaldo Vizcarrondo’s legs to set up Blaise Matuidi’s clincher on the half-hour.

Edinson Cavani had pounced as early as the third minute after the Swede had sparked a goalmouth scramble with a snap shot.

The 2-0 win puts PSG on 74 points at the top with Lyon three points behind with three games to play.

Having already won the League Cup, and with a French Cup final to come against Auxerre on May 30, Lauren Blanc’s side are on track for a domestic clean sweep.

“We came for three points and that’s what we’re going home with. So congratulations to my players,” said PSG coach Laurent Blanc.

“I don’t know if we’ll end up champions but over the last five or six games we’ve been tough to play against.

“It’s all about concentration and determination to win the ball back. In matches where we were losing the ball, you saw players start to get at each-other,” he explained.

Vizcarrondo was left red-faced when Ibrahimovic produced the cheeky pass through his legs before he turned in a panic to see Matuidi race through anc clip a slick finish round the onrushing Remy Riou in the Nantes goal.

The Swede was playing his first game since starting a three match ban stemming from comments describing France as a “shit country” when he thought he was off camera after a defeat to Bordeaux.

Nantes worked hard all night with relentless support from a packed stadium but Paris dominated throughout. Cavani might have had a hatful but for a string of first-half saves from Riou.

While Serge Gakpe and Johan Audel both forced fingertip saves from Paris ‘keeper Nicolas Douchez, who continued to impress in the absence of Salvatore Sirigu, their chances were few and far between.

Thanks to a hugely industrious Paris engine room led by Marco Verratti, Nantes were largely reduced to hopeful punts from the wing.

“When they’re up for it and concentrate like that and when they have everyone fit they’re almost unbeatable,” said Der Zakarian.

It was PSG’s sixth straight league win and their remaining fixtures appear eminently winnable — they must visit Montpellier and welcome Guingamp and Reims to the Parc des Princes, where they are unbeaten domestically in a year.

Lyon for their part beat strugglers Evian 2-0 on Saturday to maintain their challenge for a first league title since 2008.

Marseille had looked good for a Champions League place, having led Ligue 1 at Christmas.

But a classy Monaco run has seen a 15 point turnaround between the two clubs. Monaco are now on 65 points, with Marseille and Saint Etienne on 60.

Monaco had a great run in the Champions League this season only getting knocked-out 1-0 on aggregate in a close run affair with Juventus.

Third place in France offers a place in the third qualifying round for next season and all the aces now seem to be firmly in Monaco’s hands.