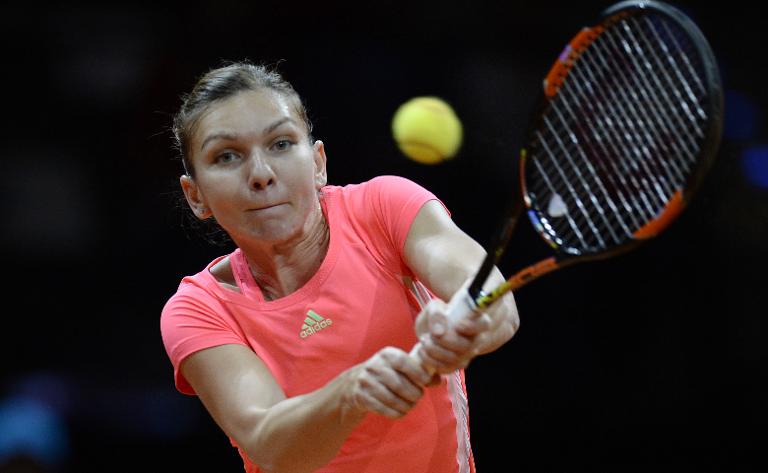 World number two Simona Halep crashed to a shock 7-6 (8/6), 6-3 defeat to France’s Alize Cornet, whilst Eugenie Bouchard’s slump continued in the first round of the Madrid Open on Sunday.

However, there were no such problems for world number one Serena Williams or defending champion Maria Sharapova who both eased through in straight sets.

Halep reached the final in the Spanish capital last year, but looked out of sorts as a double fault handed Cornet the opening set in a tie-break.

And the Romanian’s serve crumbled when serving to stay in the match in the second as Cornet wrapped up victory in just under two hours.

“It went great for me — I played really amazing on the centre court,” said Cornet.

“The first set was really tight and I saved a set point by doing an amazing backhand down the line.

“The second was tight as well. The score doesn’t really mean anything and I had to be focused to the end.

“I was a bit stressed because I was about to beat the world number two, but finally it was just a big relief and I’m really proud of myself.”

Bouchard, the eighth seed, looked to be set for a morale-boosting win as she cruised through the first set 6-0, but Strycova stormed back to win the next two sets 6-3.

Williams moved to 21-0 on the year with a 6-0, 6-1 destruction of fellow American Madison Brengle in under an hour on court.

The 19-time Grand Slam champion will face compatriot Sloane Stephens in round two.

“My preparation wasn’t as great as I wanted it to be, but it’s ok,” said Williams.

There will be no clash between the Williams sisters in round three, though, as two-time Australian Open champion Victoria Azarenka eased past Venus Williams 6-3, 7-5

Sharapova showed no signs of her recent struggles as she beat Switzerland’s Timea Bacsinszky 6-2, 6-3.

Halep’s exit could be a big boost for Sharapova had been set to meet the Romanian in the last four had both women made it that far.

The Russian dominated the Bacsinszky serve in the first set to break three times and then depended on her own in the second.

One break in the eighth game was enough to set up a second round clash with Colombian Mariana Duque-Marino.

Fourth seeded Wimbledon champion Petra Kvitova had to come from a set down to see off Belarus’s Olga Govortsova 3-6, 6-1, 6-4.

The Dane’s conqueror in the final in Stuttgart last weekend, Angelique Kerber, suffered an early exit, though, as the German lost out 4-6, 6-3, 6-3 to former US Open champion Samantha Stosur.

There was also plenty for the home fans to cheer as 10th seed Carla Suarez Navarro and world number 20 Garbine Muguruza booked their places in the second round with straight sets wins over Zarina Diyas and Maria-Teresa Torro-Flor respectively.