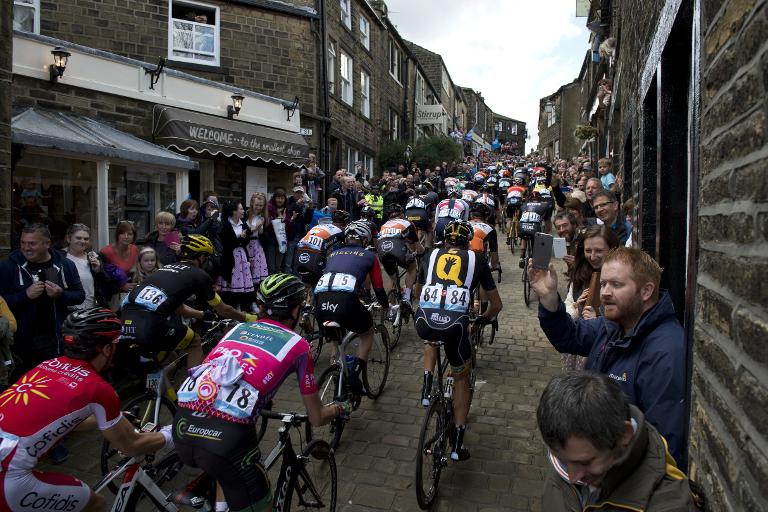 Yorkshire cyclists believe that their sport could one day rival the traditional heavyweights football and rugby league in the English region.

Huge crowds have turned out all over the northern county for the three-day Tour de Yorkshire, which started in Bridlington on Friday and ended in Leeds on Sunday.

Speaking ahead of the final stage — a 167 kilometer (104 mile) run from Wakefield to Leeds, including six gruelling climbs — some of the local lads in the peloton said cycling’s popularity is surging ahead.

“I’d say it’s already a massive cycling county as it is,” said Tom Moses of the JLT Condor team.

“If you look at cyclists who’ve come from here before you’ve got Keith Lambert, Sid Barras, they were big stars in their day.

“We’ve also got a load of pro cyclists coming from Yorkshire. The terrain and roads are suited to it, so I think it can grow and grow.”

Moses, whose brothers are also cyclists, comes from the spa town of Ilkley in West Yorkshire, near Bradford and Leeds.

Those are two of the biggest clubs in Rugby League but Moses says there was only ever one sport in his family.

“I’ve been to a few Bradford and Leeds games but I’m not really into it, I’ve just always been into cycling really,” he said.

“If you look at cycling clubs from where I’m from, a small town like Ilkley has got a thousand members, which for a small town is massive.”

Former Team Sky rider Josh Edmondson, 22, from Leeds, considers himself a big all round sports fan and watches football and rugby league.

But since the success of Bradley Wiggins and Chris Froome in winning the Tour de France, Edmondson, who rode for a Great Britain squad at the Tour de Yorkshire, believes the average sports fan is now taking more of an interest in professional cycling too.

“You’ve seen with somebody like Bradley Wiggins, he’s a household name, everybody knows who he is now whereas five years ago that wouldn’t have happened,” said Edmondson.

“So I think he started something in the UK that a lot of people have taken up after the popularity grew.

“You hear people by the side of the road shouting a load of different names from the peloton.

“As a national sport there are a lot of people who follow football but at the moment in Yorkshire, look at how many people are watching the bike race,” said the 1992 world junior cyclo-cross champion.

“Here again it’s pouring with rain and still again there’s a tremendous amount of people. I remember in Yorkshire I won the world championships in Roundhay Park (in Leeds, where the Tour de Yorkshire also ends) and there were 40,000 people there.

“There are regions where cycling is right up there with football or right up there as one of the most popular sports, so we just need that to spread out and move to the cities.

“The problem is in London there’s a hell of a lot who follow football, so if you look at the national statistics it’s going to be biased by the big cities. But in rural areas, I’m pretty sure there’s more people that ride bikes and follow cycling than follow football and other sports,” Hammond said.