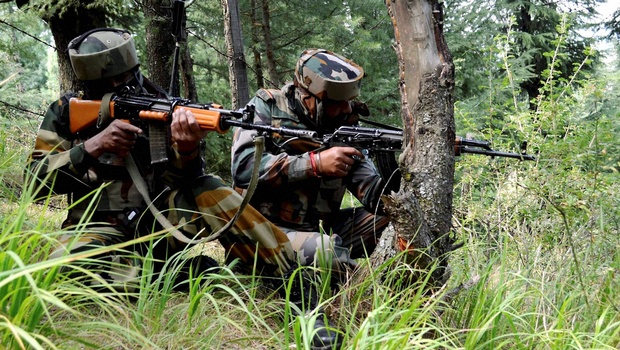 Guwahati: Suspected Khaplang faction of the National Socialist Council of Nagaland (NSCN) on Sunday broke the fragile peace of Nagaland. In an ambush around eight Assam Rifles jawans were killed and four injured, one militant belonging to Khaplang faction was also killed.Â
Â

The incident took place at Changlang Su area in Mon district around 2.30 p.m. on Sunday, when the troopers were proceeding to their company camp from Tobu area.

An Assam Rifles official said the vehicle carrying the personnel and a water tanker had gone to a nearby place to fetch water. At Changlang Su, the militants first triggered a powerful improvised explosive device (IED) at the vehicle and started indiscriminate firing.

The Assam Rifles official said there were over 20 personnel in the vehicle.

This attack on jawans has taken place at time when the Union Defence minister, Manohar Parrikar has made his maiden visit to region after assuming the charge of the Defence minister last Saturday.Â

Parrikar along with Union Minister of State for Home, Kiren Rijiju and Chief of the Army Staff Gen Dalbir Singh, GOC-in-C, Eastern Command Lt Gen MMS Rai reviewed the overall security situation prevailing in Lower Assam and alsoÂ to get a first hand feel of the ongoing operations against the militant groups.Â

In the month of March Kaplang faction of NSCN which has bases in Myanmar abrogated the 14-year old cease fire with the Government of India and expelled two leaders Y. Wangtin Naga and P. Tikhak- from the outfit for attending the meeting of Cease Fire Supervisory Board (CFSB). Both the expelled leaders formed another group.

Khaplang faction has warned that it will target the security forces and in recent timesÂ there have been attacks on security forces. This is the second split within NSCN-K after it entered into ceasefire with Government of India in 2001.The first split occurred on June 7, 2011, when two leaders of the Khaplang faction formed NSCN (Khole-Kotovi) owing to ideological differences.Â

NSCN-K in a statement than stated that unjust peace is no peace at all and 14 years of ceasefire between the outfit and India has become a mockery and futile exercise.Â