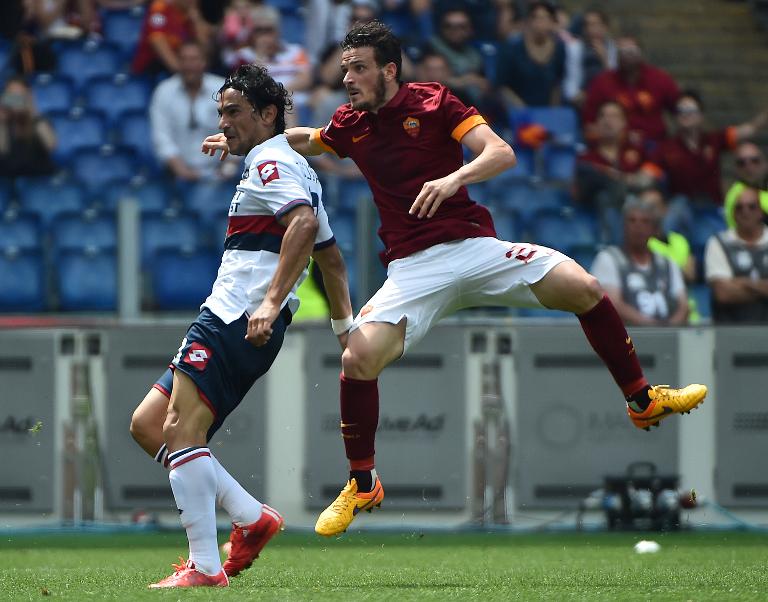 Roma leapfrogged Lazio into second place in Serie A and the final automatic Champions League spot on Sunday after a 2-0 win over in-form Genoa.

Italy midfielder Florenzi raced almost the length of the pitch after dispossessing Tina Costa before ramming a powerful shot past Genoa keeper Mattia Perin that sent the home support wild with delight at overtaking their hated local rivals.

“Sure, the second goal came a bit late for the hearts of Roma fans, but the important thing was to win,” said Roma coach Rudi Garcia.

Roma’s second straight win moves them up to 64 points, one ahead of Lazio, who were outplayed for large periods at Atalanta and could only manage a 1-1 draw.

Marco Parolo saved a point for Stefano Pioli’s under-par side with a spectacular bicycle kick 13 minutes from time after they went behind to a Giuseppe Biava header just before the hour mark.

“We played with great character, because even if this wasn’t our best performance technically-speaking it was a brilliant point,” said Pioli.

Lazio stay four points ahead of fourth-placed Napoli after Rafael Benitez’s side beat 10th-placed AC Milan 3-0 in a game that saw Milan defender Mattia De Sciglio receive the fastest red card of the Serie A season so far.

De Sciglio, who was making only his second start since January, was sent off after just 50 seconds for a clumsy foul on Marek Hamsik that gave the hosts a first minute penalty.

However the right-back was saved by his impressive goalkeeper Diego Lopez, who took advantage of Gonzalo Higuain having to wait nearly a minute to take the spot kick by leaping to his right and punching the Argentine’s powerful shot wide.

Milan’s 10 men resisted for 70 minutes after that scare and even hit the post through Giacomo Bonaventura five minutes before half-time.

But three goals in six minutes from Hamsik, Higuain and Manolo Gabbiadini won the game for Napoli and kept them in the Champions League hunt.

Antonio Di Natale overtook Roberto Baggio in the all-time scoring charts with his 206th Serie A goal, which was enough for Udinese to win 1-0 at Verona, who had both Jacopo Sala and Rafael Marquez sent off.

This season may be Di Natale’s last for Udinese after 11 years at the club, but he was reluctant to talk about where he would be next season.

“It is an honour to overtake Baggio and I am very happy for the goal, but I don’t want to talk about my future,” said 37-year-old Di Natale.

Genoa drop down to seventh following their defeat at Roma and Fiorentina’s 3-1 beating of lowly Cesena, which took place thanks to two goals in four first half minutes from Josip Ilicic and another from Alberto Gilardino just after the hour mark.

Vincenzo Montella’s Fiorentina are on 52 points, two in front of Genoa and one ahead of sixth-placed Sampdoria, who on Saturday were beaten at home for the first time this season by Juventus as Massimiliano Allegri’s Old Lady won their 31st league title with a first half Arturo Vidal header.

Inter Milan were jeered off the San Siro pitch after a goalless draw with Chievo that leaves them in eighth on 49 points, two behind Sampdoria.

Atalanta’s point with Lazio wasn’t quite enough to guarantee them safety.

They stay fourth from bottom and seven points clear of Cesena and Cagliari, who take on already relegated Parma on Monday night.