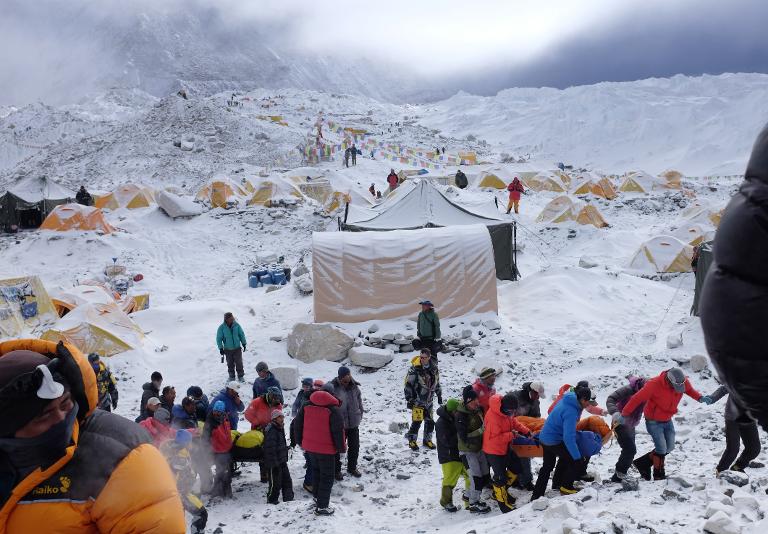 Mountaineering companies Sunday called off their spring expeditions to Mount Everest, marking the second year with virtually no summits after an quake-triggered avalanche killed 18 on the world’s highest peak.

The 7.8-magnitude quake left a trail of death and destruction when it erupted around midday on April 25, bringing down buildings in the capital Kathmandu and triggering an avalanche that ripped through Everest base camp.

Top climbing firms said they had cancelled their plans even though the avalanche spared their teams, due to fear of aftershocks and destruction of the route to the summit.

“And there is nothing in place for climbers anyway…no ropes or ladders…. So there is no point in continuing this season,” he added.

“All our members… are climbing down now. No more going up now, not until routes are clear and not until everything is in place for climbers,” said Himex’s Tamding Sherpa.

The decisions come less than a week after the Nepalese tourism department chief advised climbers against abandoning their expeditions, saying repairs were underway while down playing concerns of further quakes and aftershocks.

The Sagarmatha Pollution Control Committee, the agency authorised to set the route that climbers take up Mount Everest, has yet to take a decision on whether it will pull the plug on climbing.

Some 800 climbers were on the mountain when the avalanche roared through base camp sparked by a massive earthquake that left more than 7,000 people dead.

The disaster was the worst to hit Everest and came just one year after another avalanche killed 16 Nepalese guides, sparking an unprecedented shutdown of the 8,848-metre (29,029-foot) high mountain.