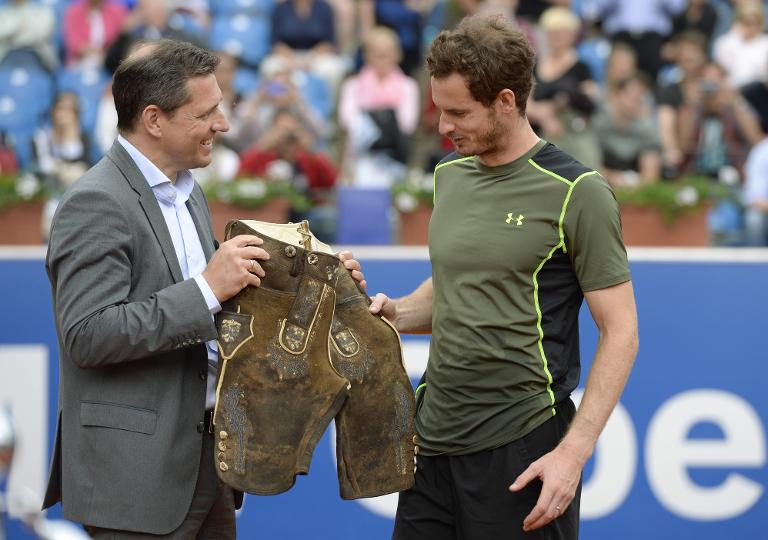 Andy Murray was delighted to become the first Briton to win a clay-court title for 39 years on Monday in Munich — even if the accompanying lederhosen were a little snug.

The 27-year-old claimed the first clay-court title of his career by seeing off Germany’s Philipp Kohlschreiber in a tough three-setter to seal a 7-6 (7/4), 5-7, 7-6 (7/4) in just over three hours in the rain-delayed final.

It was the 32nd title of the world number three’s career and Murray became the first British player to win an ATP clay-court tournament since Englishman Christopher “Buster” Mottram in April 1976.

Heavy rain meant only 23 minutes of the final could be played on Sunday before the match was moved, but Murray showed impressive form as he kicked off his French Open preparations.

“I didn’t realise I was the first Brit to win on clay for so long, so that’s obviously an honour,” said the Scot, who was playing in his first tournament since getting married last month.

“It was a really tough match, he served very close to the line and I was getting frustrated.

“It felt like the momentum was with him for a lot of the match and it took a long time for me to get it back.

“I think it was a high quality game, we both served well and I felt like there were some good rallies.

“He anticipated very well, especially when he came to the net.”

As well as winning a sports car and picking up the winner’s cheque, Murray was also presented with a pair of traditional Bavarian lederhosen as part of his prize and got into the spirit by wearing them on court.

“They are very tight. I have been told that you have to wear them to loosen them up, but I’m not sure how often I’ll do that although I’ll definitely keep them and take them home,” he said.

“It was hard to get them on as I was obviously sweating from the match, which made them sticky.”

The final was a gruelling tussle and reminiscent of their epic five-setter in the third round at Roland Garros last year when Murray claimed victory after winning 12-10 in the fifth.

The Scot had little time to celebrate with a bye into the second round on Wednesday at this week’s Madrid Masters — where he is set to face the winner of Kohlscreiber’s first round match against Colombia’s Alejandro Falla.

“I won’t practise until I’ve had 24 hours of rest and then hopefully feel good on Wednesday,” said Murray.

“It’ll be tough for him too.

“It was obviously a long match and we can expect different conditions in Madrid, where it’ll be hotter.

“He plays Falla, who came through qualifying and has been there for a week, so will be used to the conditions.”